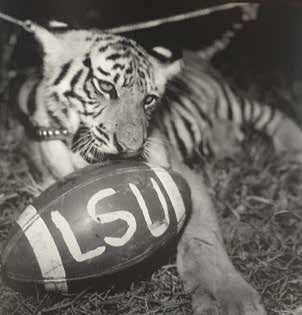 MIke II (the first one)

A few days after the death of Mike I, Representative Kenneth Deshotel of St. Landry introduced a resolution in the Louisiana legislature endorsing the purchase of another tiger. On campus, the Mike the Tiger Fund was launched by Student Body President Enos Parker and fellow students Vic Koepp and John Nunn. On August 4,1956, the LSU Board of Supervisors passed a resolution stating that caretaker salaries and maintenance costs for the new tiger would come equally from student fees and the Athletic Department.

Mike II was born on February 28, 1956, at the Audubon Zoo in New Orleans. He arrived secretly on campus on September 28, 1956. Mike’s unveiling occurred the next day, September 29, opening day of football season. A ceremony was held, during which Enos Parker presented a check for $1,500 to George Douglas, superintendent of the Audubon Zoo.

Legend has it that less than a month after his arrival at LSU, Mike II died of pneumonia at only eight months of age. Reportedly, Mike II was then secretly buried under a willow tree along the Mississippi River by newly appointed athletic director Jim Corbett, campus police chief C. R. “Dick” Anderson, and LSU Athletic Department business manager Jack Gilmore.

To explain Mike’s absence, a statement was issued in the LSU Daily Reveille on October 23 saying that Mike was having trouble adjusting to his enclosure and was there being kept inside “until he becomes more accustomed to the excitement of being a mascot.” 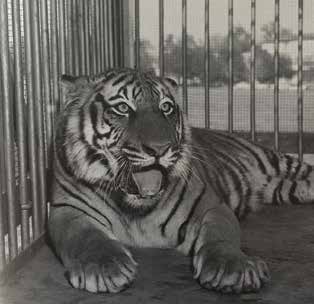 Mike II (the second one)

Another cub of the right age was located at the Woodland Park Zoo in Seattle, according to Gilmore. In addition to Gilmore’s testimony, several pieces of evidence support the legend that the original Mike II died and was replaced by another young tiger. Photographs of Mike II taken before and after his convalescence are clearly of two different tigers (facial markings of tigers are as unique as fingerprints), and he seemed to have grown at a tremendous rate.  All rumors of the death and replacement of Mike II were denied.

The second Mike II reigned at LSU for only one season. He died at the Audubon Zoo on May 15, 1958, of complications associated with multiple fractures to his left rear leg (it was not known exactly how or when the leg was injured).

In 1955, Mike’s care was taken over by Dr. Joe Dixon of the LSU Department of Veterinary Science. Thereafter, while the Athletic Department retained authority over the tiger’s day-to-day life, Mike I and subsequent tigers would have a veterinarian to attend to their medical needs.