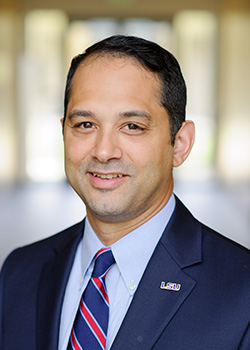 Jared J. Llorens is dean of the LSU E. J. Ourso College of Business, the state’s flagship school of business.

An expert in public management focusing on compensation and recruitment, Jared came to LSU as an assistant professor of public administration in 2009. In 2015, he became chair of the Department of Public Administration. Following a term as interim dean, Jared began his service as the college’s ninth dean on November 1, 2020.

Llorens, J. J. (2011). Public Sector Recruitment in a Time of Hyper Technological Change: Towards a Model of E-Recruitment Adoption and Its Impact. Review of Public Personnel Administration, 31(4).

Coggburn, J. and Llorens, J. J.Strategic Planning for your Program In Bruce McDonald and William Hatcher (Ed.), The Public Affairs Faculty Manual: A Guide to the Effective Management of Public Affairs Programs

Llorens, J. J. and Wilson, A. (2012). Leveraging Emerging Technologies in the Recruitment of Millennial Employees In William Sauser and Ronald Sims (Ed.), Managing Human Resources for the Millennial Generation