The laboratory also features a Becton Dickinson FACScan benchtop flow cytometer with single laser capability and 3 color emissions. Multi color immunophenotyping, cell cycle analysis, apoptosis studies, and measurements of cellular function are examples of applications performed routinely in this laboratory. This unique centralized facility provides analytical capabilities for investigators throughout the Louisiana State University System, including the LSU Agricultural Center and LSU Pennington Biomedical Research Center.  Both  PC and Macintosh computers are utilized in data acquisition and analysis and are all connected to the Veterinary Medicine and LSU networks. The School of Veterinary Medicine has operated the LSU Flow Cytometry Facility since 1986.

The following examples illustrate unique applications which are available with flow cytometry instrumentation. Cell cycle analysis and immunophenotyping are the predominant applications performed in the facility; however, assays measuring cellular function and viability have been conducted. 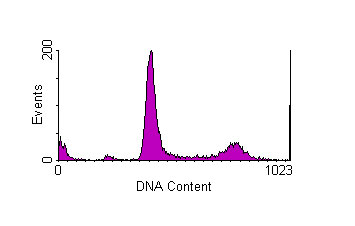 Canine melanoma cells were fixed and permeabilized for subsequent Prodium Ioidide staining of DNA. Cell cycle analysis was performed and the results were compared to cell cycle analysis of canine peripheral blood mononuclear cells. The resultant DNA index was 1.1 illustrating tumor hyperploid. analyze flow cytometric data from remote computer labs within the university network.  All computers in the facility are networked to Veterinary Medicine and LSU mainframes and data is readily transferred within the university. 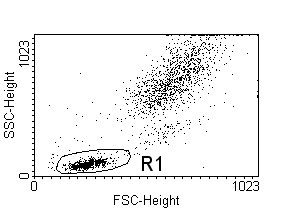 The scatterplot represents cell size (x-axis) versus internal granularity (y-axis) for peripheral blood leukocytes. A three part differential of lymphocytes, monocytes and granulocytes (predominantly neutrophils) are illustrated using a bivariate histogram. Lymphocytes are located in the polygon R1 and represent 32% of peripheral blood leukocytes. Red blood cells are lysed with NH4CL and platelets as well as ghost RBCs are eliminated based on size threshold. 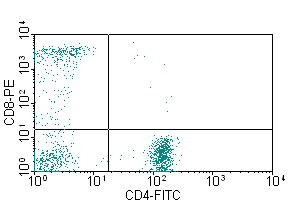 What is Flow Cytometry?

Flow cytometry is a process in which individual cells or biological particles are labeled with fluorescent markers and pass in single file through a fluidic stream. While in the fluidic stream the cells are hit by a laser beam resulting in emitted scattered visible light and fluorescence detection. Physical and chemical properties of cells or particles are subsequently analyzed. Flow cytometric analysis has been performed on mammalian lymphocytes and other cellular elements, chromosomes, tumor cells, bacteria and fungi.

What applications are performed using a flow cytometer?

Chemical and physical characteristics of cells which can be measured by flow cytometry include cell size, cell shape, surface membrane receptors, DNA content, nuclear antigens, intracellular Ca2+, intracellular pH, and gene expression.  Flow cytometers can analyze a population of cells, at rates of 1000 to 30,000 cells per second depending on the type of flow cytometer. One powerful application of flow cytometry requires identification and subsequent characterization of a subpopulation of cells within heterogeneous populations. This is referred to as cell sorting.  In comparison to other technologies such as fluorescence microscopy, flow cytometry offers many advantages such as large sampling statistics, precision, and sensitivity. In comparison to RIA and ELIZA methodologies, flow cytometry has the ability to detect rare cells and select specific subsets within a mixed population.

What are the components of a flow cytometer?

The basic components of a flow cytometer/cell sorter are a laser light source, a fluidic sample chamber and optical assembly, and photodetectors and processors to convert light signals into subsequent digital signals. The instrument is interfaced with a computer system for the storage and analysis of digitized listmode data.

What parameters are measured with flow cytometry?

Cells pass in a single file into the center of a flow cell or nozzle where they are surrounded by sheath fluid which is typically isotonic saline. As the cells pass through the stream they are hit by the laser beam.  Some light is scattered at very small angles (3-12o) and this is referred to as forward angle light scatter, which is a function of cell size and is detected with a photodiode. Light which is scattered at larger angles (90o), is proportional to the magnitude of cellular granularity or internal complexity, and this is referred to as right angle or side scatter and is detected with a photomutliplier tube (PMT). If the cells are stained with particular fluorescent marker(s), fluorescence emission is also detected 90o to the incident laser beam with a PMT.  The PMTs allow conversion of photons  to electrical impulses. Subsequently, signals are amplified and evaluated, digitized and fed to a pulse height analyzer (PHA) for storage. The listmode data is illustrated in the form of histograms or dot plot displays with the computer interface.

The FACScan flow cytometer is a benchtop analytical flow cytometer which can measure two light scatter parameters (cell size and internal granularity) as well as 3 color fluorescence emissions. The light source is a 15 mW 488 nm air cooled argon-ion laser.  Fluorescence detection is accomplished with photomultiplier tubes and bandpass filters.  The 3 bandpass filters allow for collection of fluorescence at 530 nm, 585 nm and > 650 nm.  Flourochromes that are compatible with the optical configuration of the machine include FITC (530 nm);  Phycoerythrin and Propidium Iodide (585 nm); and PerCP, Tricolor, and 7-ADD  which both exhibit emissions above 650 nm. The FACScan is interfaced with a Macintosh G3 workstation which contains graphics software packages used for data acquisition and analysis.  In addition, Pentium II's are used to analyze flow cytometric data from remote computer labs within the university network.  All computers in the facility are networked to Veterinary Medicine and LSU mainframes and data is readily transferred within the university.

FACS Aria flow cytometer measures up to 9 parameters including two light scatter parameters and seven fluorescence emissions.  The instrument is equipped with 2 lasers, a 488 nm Coherent Sapphire solid state and a 633 nm JDS Uniphase HeNe, allowing various combinations of fluorochromes for multi color immunophenotyping and cell functional assays.  In addition, the cytometer can perform high speed, dual-laser sorts and has 4 way cell sorting capacity.  The Aria is interfaced with a workstation that includes an HP X4000 PC computer running Becton Dickinson FACSDiVa based software for data acquisition and analysis.

The FACS440 flow cytometer / cell sorter was purchased in 1986 and provided both cell sorting and analytical capabilities until the FACScan purchase in 1992.  The instrument was retired in 1999 and provided a tremendous service in terms of cell sorting until that time.

The Flow Cytometry Facility is a Biosafety Level 1 laboratory and performs data acquisition and analysis.  Therefore, each investigator must prepare samples in their designated laboratories.  It is advisable that each investigator consult with the facility regarding their experimental protocol to ensure that the procedure is compatible with the instrumentation and use of appropriate controls are maintained for each model.  First time investigators should schedule a meeting with the facility to discuss their projects as well as operating procedures of the laboratory.

All cell samples containing human or zoonotic pathogens present a biohazard to facility personnel and must be fixed prior to delivery to the facility.  Investigators must consult with the facility prior to sample preparation if live cell analysis is required for a particular study, regardless of human or veterinary species origin.

A 2% formaldehyde stock solution is made by adding 2.0 g paraformaldehyde to 100 ml of 1X PBS (Ca2+ and Mg2+ free).  Heat to 70oC in a fume hood until the paraformaldehyde goes into solution.  Allow the solution to cool to room temperature. Filter through a 0.45 µm filter. Adjust to pH 7.2 - 7.4 using 1 M NaOH or 1 M HCl as needed. Store in the refrigerator.

The Flow Cytometry Facility also provides an exceptional opportunity for undergraduates, graduate students, post-doctoral fellows and veterinary students to become knowledgeable with the operation and application of flow cytometric instrumentation.  These learning experiences can occur formally through a hands-on laboratory course on flow cytometry (PBS 7413) or informally through undergraduate and graduate research projects.

The flow cytometry laboratory module is a five week course designed to instruct students in the principles and various applications of flow cytometry.  In addition, participants will be introduced to several computer software packages as methods of interpreting data generated from the instrument.  The module is basically structured into four laboratory sessions, each individual session includes cell processing, cell staining with fluorescent probes, data acquisition and computer generated data analysis.

In addition, the facility has been utilized in the laboratory section of the Veterinary Immunology course (VMED 5010) in the Veterinary Medicine curriculum to introduce first and second year students to the theory and clinical capabilities of flow cytometry instrumentation.