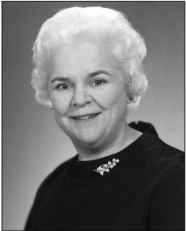 Evelyn Pruitt was born in 1918 in San Francisco. She received degrees in geography from UCLA in 1940 and 1943. Evelyn moved to Washington, D.C. in 1942 where she worked as a cartographic editor with the U.S. Coast and Geodetic Survey. In 1948 Evelyn moved to the Office of Naval Research (ONR) where she remained until retirement 25 years later. During her years with ONR she was a prime mover in the development of coastal science including the foundation of the internationally famous Coastal Studies Institute at LSU. After retirement she served as a consultant for several organizations including the Army Corps of Engineers. She sponsored the research of many members of the LSU geography department including R. J. Russell, F. B. Kniffen, W. G. Haag, R. C. West, W. G. McIntire and H. J. Walker. Her generous last contribution to LSU geography was in the form of an endowment to assist women graduate students.

Dr. Judith Carney
Department of Geography
University of California, Los Angeles
African Rice in Atlantic Worlds:
Diasporics of a Crop and its Cuisine

Dr. Sallie Marston
School of Geography and Development
University of Arizona
Of Eagles and Flies: Orientations to the Site
and Cases of Radical Politics

Dr. Kathleen O'Reilly
Department of Geography
Texas A&M University
Under an Open Sky:  Sanitation and the Re-ordering of Spaces in India

Dr. Patricia Gober
Decision Center for a Desert City
Decision Making for Water Security: Reflections
from the USA and Canada