A major part of the department’s history is the story of the life’s work of two remarkable men: Benjamin C. Craft and Murray F. Hawkins. These two men set the course of petroleum engineering, not only at LSU, but, in many ways, in the petroleum industry as a whole. Beyond sending competent engineers into the field, they helped their students develop as people, and their influence is still evident, both in the operation of the department and in the professional style of their former students. 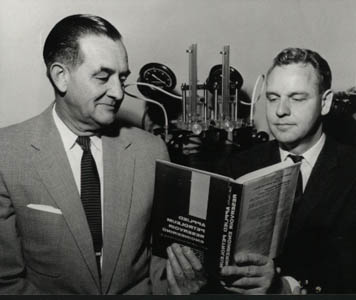 Hawkins joined the department in 1946. His academic experience was not in engineering, but he had worked for Carter Oil Company Research and for the Ethyl Corporation in research. Hawkins very rapidly familiarized himself with petroleum engineering technology. He assisted Craft in teaching courses at every level of the program and developed his own area of expertise — reservoir engineering. Early in the 1950s, Hawkins redesigned the reservoir engineering courses that were offered in the department and put them at the edge of current technology. Even today, the basic design of these courses remains the same.

Craft and Hawkins co-authored the textbook Applied Petroleum Reservoir Engineering that became a standard text in petroleum engineering courses both in the United States and around the world. Published in 1959, the "Craft & Hawkins" textbook is still a bestseller.

Craft’s death in 1964 was a heavy blow to everyone in the department. For nearly 35 years, he had led the department on its path toward professional excellence. Although "Benny" Craft would be a hard act to follow for even the most capable administrator, Murray Hawkins was up to the challenge. He led the department until his retirement in 1977.

Craft and Hawkins enabled the department to develop, to grow, and, finally, to remain strong by fighting for their convictions and the best interests of their students. They were highly respected by their colleagues in academia, by top managers in the industry, and by workers in the field. Of special importance, however, they were down-to-earth, dedicated teachers and friends to the hundreds of students who had passed through the department.

Benjamin C. Craft and Murray F. Hawkins created one of the top programs in the country from nothing and established the groundwork that kept the department on the leading edge of petroleum technology and education throughout the years. They built the strong foundation on which the department stands today.