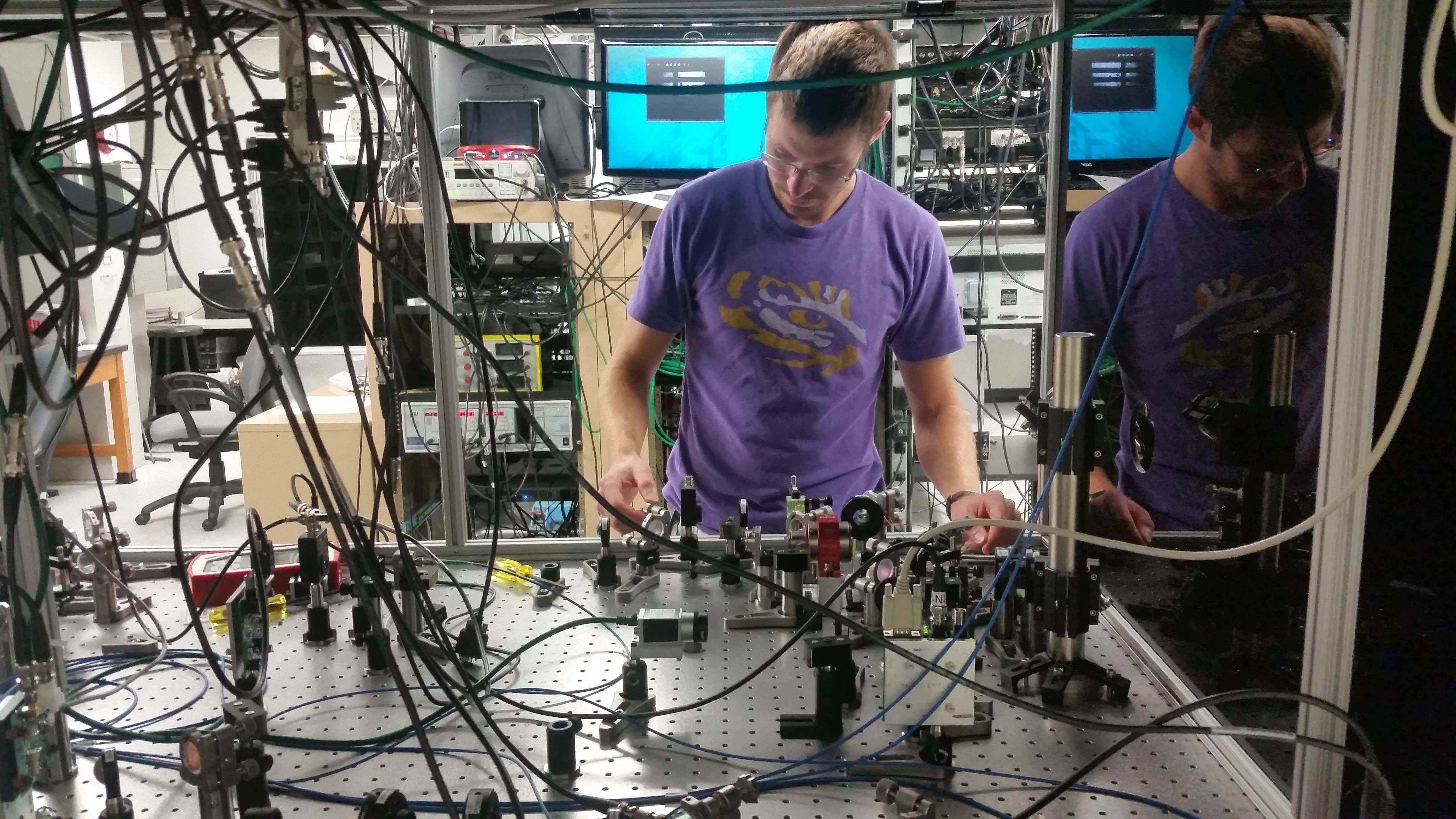 By quieting the quantum whisper, we can now listen to the more subtle notes of the cosmic symphony.

Gravitational wave detectors have opened a new window to the universe by measuring the ripples in spacetime produced by colliding black holes and neutron stars, but they are ultimately limited by quantum fluctuations induced by light reflecting off of mirrors. LSU Ph.D. physics alumnus Jonathan Cripe, postdoctoral fellow, NIST, and his team of LSU researchers have conducted a new experiment with scientists from Caltech and Thorlabs to explore a way to cancel this quantum backaction and improve detector sensitivity.

In a new paper in Physical Review X, the investigators present a method for removing quantum backaction in a simplified system using a mirror the size of a human hair and show the motion of the mirror is reduced in agreement with theoretical predictions. The research was supported by the National Science Foundation.

Despite using 40-kilogram mirrors for detecting passing gravitational waves, quantum fluctuations of light disturb the position of the mirrors when the light is reflected. As gravitational wave detectors continue to grow more sensitive with incremental upgrades, this quantum backaction will become a fundamental limit to the detectors’ sensitivity, hampering their ability to extract astrophysical information from gravitational waves.

“We present an experimental testbed for studying and eliminating quantum backaction,” Cripe said. “We perform two measurements of the position of a macroscopic object whose motion is dominated by quantum backaction and show that by making a simple change in the measurement scheme, we can remove the quantum effects from the displacement measurement. By exploiting correlations between the phase and intensity of an optical field, quantum backaction is eliminated.” 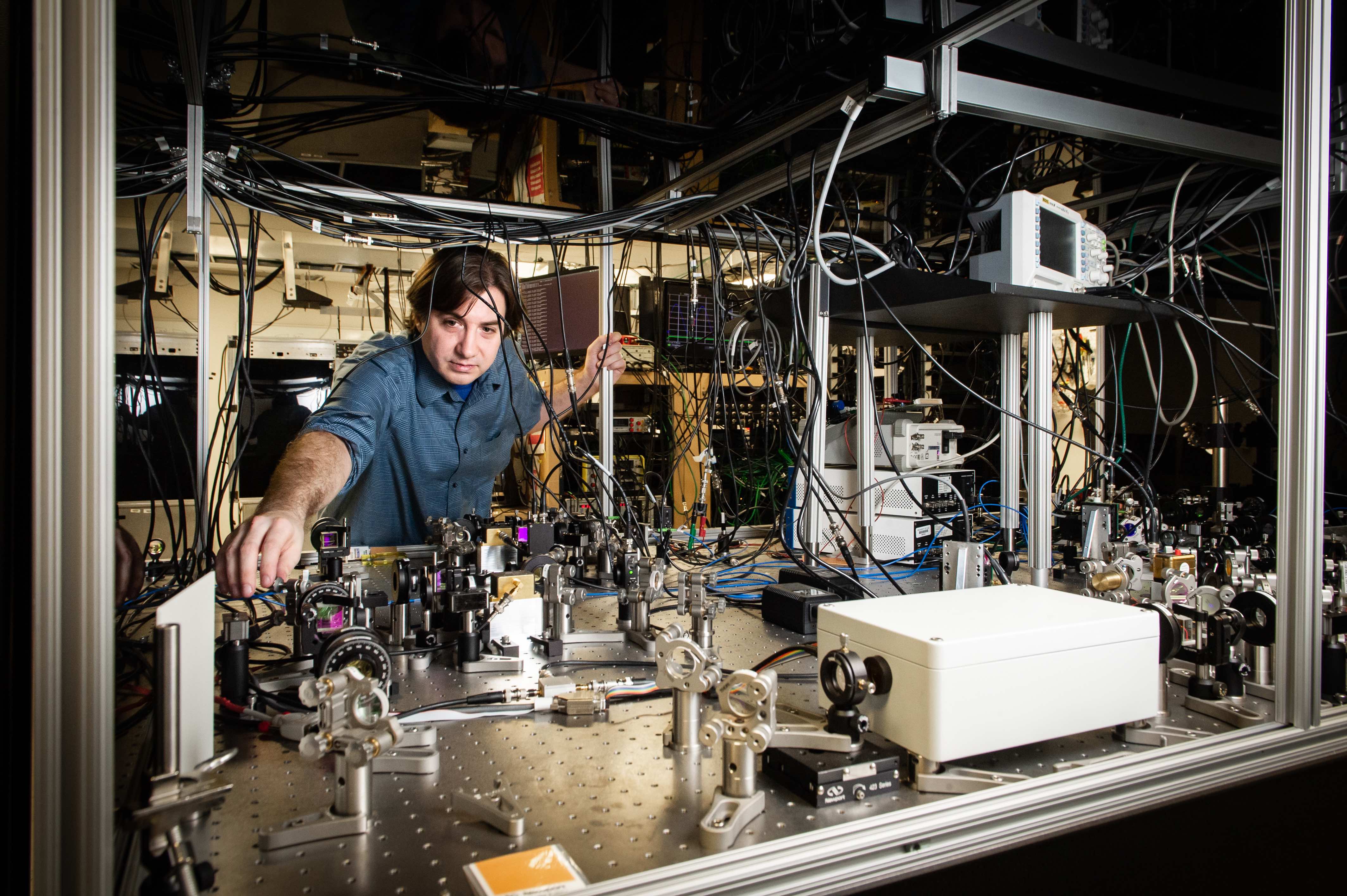 Garrett Cole, technology manager at Thorlabs Crystalline Solutions (Crystalline Mirror Solutions was acquired by Thorlabs Inc. last year), and his team constructed the micromechanical mirrors from an epitaxial multilayer consisting of alternating GaAs and AlGaAs. An outside foundry, IQE North Carolina, grew the crystal structure while Cole and his team, including process engineers Paula Heu and David Follman, manufactured the devices at the University of California Santa Barbara nanofabrication facility.

“By performing this measurement on a mirror visible to the naked eye—at room temperature and at frequencies audible to the human ear—we bring the subtle effects of quantum mechanics closer to the realm of human experience,” LSU Ph.D. candidate Torrey Cullen said. By quieting the quantum whisper, we can now listen to the more subtle notes of the cosmic symphony.”

“This research is especially timely because the Laser Interferometer Gravitational-wave Observatory, or LIGO, just announced last month in Nature that they have seen the effects of quantum radiation pressure noise at the LIGO Livingston observatory,” Thomas Corbitt, associate professor in the LSU Department of Physics & Astronomy, said.

The effort behind that paper, “Quantum correlations between light and the kilogram-mass mirrors of LIGO,” has been led by Nergis Mavalvala, dean of the MIT School of Science, as well as postdoctoral scholar Haocun Yu and research scientist Lee McCuller, both at the MIT Kavli Institute for Astrophysics and Space Research.

“Quantum radiation pressure noise is already poking out of the noise floor in Advanced LIGO, and before long, it will be a limiting noise source in GW detectors,” Mavalvala said. “Deeper astrophysical observations will only be possible if we can reduce it, and this beautiful result from the Corbitt group at LSU demonstrates a technique for doing just that.”

“Quantum back action cancellation in the audio band” (PRX)

Physical Review X (PRX) is an online-only, fully open access journal that places a high value on innovation, quality, and long-term impact in the science it publishes. It seeks to publish a select set of papers from all areas of pure, applied, and interdisciplinary physics that have the potential to influence current and future research and to have a long-lasting and profound impact in their relevant fields.