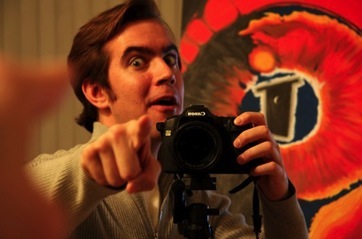 FMA alum (2001) Mark Landry founded the Cinema Club at LSU in the fall of 1999, and produced the first two annual Outhouse Film and Video Festival events in 2000 and 2001.

Mark’s first professional experience in the entertainment industry came in the form of a dream internship between his junior and senior years at LSU, when he was invited to spend the summer at Skywalker Ranch in the marketing department at Lucasfilm, Ltd. The internship exposed Mark to both the artistic and business sides of the film industry, and provided rare access to the marketing, distribution, and technical areas of the company.

In the Fall of 2001, he entered the prestigious ranks of filmmakers such as George Lucas, Robert Zemeckis, Bryan Singer, John Singleton, and many more as a student of the University of Southern California School of Cinematic Arts. Mark’s first day in Los Angeles was spent on the set of Steven Soderbergh’s Ocean’s Eleven, where he had the opportunity to observe an Oscar-winning filmmaker and fellow Louisiana native at work on the Warner Bros. studio lot. As a student at USC, Mark produced and crewed several film projects and was invited to join a hand-picked team of producers in creating the school’s 75th Anniversary live show and documentary videos. The event was executive produced by Brian Grazer (The DaVinci Code, The Cowboy Way, A Beautiful Mind) and Michael B. Seligman (“The Academy Awards,” “The Primetime Emmy Awards”), and included presenters such as Steven Spielberg, George Lucas, Clint Eastwood, Will Ferrell, Ron Howard, and many more.

Mark hopes to bring productions back to Louisiana whenever possible.

What have you been doing since graduating from LSU?

I went to USC film school for grad school. I was in the production program, so I got amazing hands-on experience in every aspect of filmmaking. It was incredible. There were always A-list filmmakers guest lecturing and attending events. Since I graduated from USC in 2004 I’ve been working project-to-project as a producer/editor, and writing constantly. Like anybody else in L.A. trying to make it, I have a day job as well. I’m the marketing manager for a software firm called Dekker, Ltd.

How's the other LA?

The city itself is very interesting and colorful. It has its amazing, beautiful qualities and its horrific sides as well. Just like any person or place. You’ll get a good feel for it by watching three films: L.A. Story, Mullholland Drive, and The Big Lebowski. They pretty much cover it all.

The people are interesting, and they’re what make the city what it is. Almost everyone is from someplace else, so in that regard it’s like permanent summer camp (with all the ego drama that comes with the type of pubescent posturing one finds at summer camp). And everyone you meet can become a friend, but they’ll never just be a friend. They’ll always be business associates too.

There are those who come here looking for fame and the love that their parents didn’t provide, and that’s sad. Those people will never find what they’re looking for. It’s like the first circle of Hell in Dante’s Inferno, in which the naked people are running around a track chasing an elusive bit of cloth to cover their nasty rotting bodies, but they’ll never reach it.

There are the trust fund-ers from the Palisades who have to work hard, but in a different way than someone like me. They went to Ivy League undergrad schools, and seem to have more control over timing their calculated entries into the business.

Then there are people like me who come from working-class families in working-class towns and are committed to one thing and one thing only, and we’re not asking for permission.

The cinemas here are the best I’ve seen. If you ever come here, you have to see a film at the Arclight in Hollywood. Because of all this - and the weather - I am in love with Los Angeles.

Tell us about your filmmaking projects.

My business/writing partner and I, through our company Silver Cities Pictures and others, have a script that we’ve written and that is out now to producers through an agent at one of the top agencies in town. We have also optioned four other screenplays from aspiring screenwriters. Now we’re working with these writers to develop new drafts, which we’ll take to studios and producers once they’re ready. We have one project that we plan to shoot in Louisiana, but it’s still too early to discuss.

What are you proudest of doing in your work in film, so far?

Wow, that’s a good question. I would say that it’s a trick question, or rather, I’ve got a trick answer because it’s not as though I’m proudest of one project or another. I’m proud that I came from Louisiana and simply will not give up doing what I know in my bones is the only thing I’m good for. I love that. I’m proud of the skills that I’ve added to what I believe are my natural inclinations, and I’m proud of my instincts and decisions thus far. But most of all, I’m proudest that in such a cutthroat industry, I manage to keep my integrity intact. That is a difficult thing to balance.

Any fond memories of LSU?

I believe the fondest memories in my life thus far are set at LSU. As amazing as my life in Los Angeles is and potentially will become, my greatest nostalgia is for the people and experiences from my time at LSU. Learning from Trish Suchy, Lenny Stanton, and Rick Blackwood sharpened my mind. Meeting Kyle Crane, Britt King, Paul Orr, and Jeff Roedel of the Cinema Club and making films with them was the most magical thing I’ve ever experienced. It was a community of artists and genuine cinema lovers, and the things we were able to learn together will always be my firmest foundation as I move forward.

How did you first get involved in cinema? What was the attraction?

Ghostbusters. That’s it. Ghostbusters did it to me. I was hooked by age six.

(In no particular order, and can change depending on my mood)

As far as directors go (and I feel the same about titles and actors), I believe that the objective “best” occupy one category, and one’s personal “favorites” are a separate beast. I’ll deal with my favorites.

Kubrick: while he is one of the best, he also happens to be my favorite and most respected.

John Hughes: I grew up looking up to his characters, and I feel like my life is very much a John Hughes movie from the 80s.

Scorsese: another of the best who happens to be a favorite. I love the way he even thinks about cinema. He puts together a moment more viscerally than any other living filmmaker in my opinion.

Steven Soderbergh: is there anything he can’t do? Plus he’s a good person, as far as I can tell.

Any advice for current FMA students who want to work in the industry?

This is an interesting question, because “working in the industry” could end up being many varied things. There are literally hundreds of different positions one can fill within the entertainment industry.

My advice would be to try to figure out as best you can which area of interest you have, and then focus on that. Learn the other areas that surround, depend on, and support your focus, but keep your focus no matter what. Also, you have to have a thick skin and incredible stamina. Start getting used to not sleeping very much and working your butt off. If you like that sort of thing, then you’re in good shape. Having a ton of money is probably the best advice I can give, but it’s obviously not within everyone’s control.

Other than that, just do what makes you happy because this is your life. Don’t waste it. Learn as much as you can about what you’re trying to get into and go for it. Be smart, work hard, treat people well, and never ask for permission to dream big.