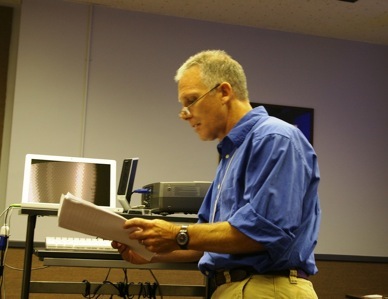 Tell us about yourself.

I am from San Diego, California. I received my BA in French Literature from UC San Diego. After my BA, I got married and we moved to Vancouver, British Columbia, where I received an MA in Comparative Literature (French and Italian) from the University of British Columbia. Subsequently we returned to California and I finished my studies in Comparative Literature with a Ph.D. (French, Italian and Semiotics) at UC Riverside. Since receiving my Ph.D. in 1996, I have been working at LSU in the Department of French Studies, the Department of Foreign Languages (Italian) and am on the faculty in the programs of Film and Media Arts and Comparative Literature. In Fall 2008, I was named the LSU in the Ubaye Valley Professor of French Studies.

I have a Certificate as a Fretted Instrument Maker and make acoustic guitars when time permits.

Your family recently had an unusual family project in conjunction with a book your wife wrote, right?

My wife, Sara is a free-lance writer and author. In 2007 she published A Year Without “Made in China”: One Family’s True-Life Adventure in the Global Economy. The book recounts our family’s trials and tribulations as we try to live a year without purchasing products manufactured (and grown) in China. It was quite a year. We have three children who are very good sports and very patient with their parents. Our son Wes is 7, and our daughters Sofia and Audrey (named by her brother after Audrey Hepburn) are 5 and 2 respectively. We have a dog named Rick and drive a 2000 VW Eurovan. In brief, there you have it.

You’ve traveled pretty extensively, including some travels with study abroad programs. Where have you gone?

As a graduate student, I spent a year studying semiotics at the University of Bologna where I was fortunate to take a course taught by Umberto Eco. Since coming to LSU I have directed the LSU summer program in Paris 8 times. In 2000 I established a summer French immersion program in the Ubaye Valley of France and continue to be this program’s director. During these trips, I have had great occasion to visit many wonderful sites. My favorites are the Ubaye Valley (for the Alps and the many friends that I now have there) and Cassis (in Provence) where you can hike and boat out to the marvelous fjord-like Calanques. I love Paris and last year bought a bicycle there and had the best time I have ever had biking around Paris.

I also love Italy and love Bologna. It’s a great city and not touristy. The island of Elba is also a favorite.

How did you become interested in studying and teaching French and Italian language, culture, art, and literature?

As far as my interests in languages, culture, art and literature, it is kind of a mix. I have always loved cinema. I grew up about 45 minutes north of San Diego and when we could my friends and I would drive to a landmark cinema in San Diego and watch whatever we could see. It was there that we became familiar with Werner Herzog, Stanley Kubrick, John Waters and Akira Kurosawa. When I went to college I was very interested in French philosophy so I learned French to read the original texts in the original language. I then discovered that many of the philosophers that I liked were primarily literaries, so I studied French Literature. This was pretty much the case as well with Italian. As I studied semiotics, I really enjoyed Umberto Eco’s theory of semiotics, so I pursued Italian in the same manner. Coming to language and literature in this way, I gained a great appreciation for culture and developed a great interest in the connections between the visual arts and culture. And thus I have degrees in Comparative Literature which allows me to pursue and eclectic mix of interests. I have continually worked in areas linking art to culture. In a recent paper I examined the link between Rossellini’s 1946 neorealist film Rome Open City and the insurgency in Iraq. I have recently discussed the relationship between Fellini’s La dolce vita (1960) and Sofia Coppola’s Lost in Translation (2003) and their commentaries on the possibilities of establishing meaningful relationships in the Modern age.

What courses have you taught or are you teaching for FMA?

In FMA I have individually taught the Introduction to FMA, and I have collaboratively taught the course with Dr. Suchy and Dr. Roberts. I also regularly teach an Italian Cinema course that is included among the FMA courses. In this course we follow the development of Italian cinema from neorealism immediately after WWII to the present. The course is designed as a general introduction to Italian cinema and emphasizes the link between changes in culture and visual representation over the last fifty years. We also follow themes that persist in Italian cinema including: the role of children, the lasting impact of WWII on film and culture, and the change in culture and cinema resulting from Italy’s modernization during the “Economic Miracle” (1958-63).

This is where Federico Fellini becomes a major influence and we watch La dolce vita and chart its influence on film and culture through its direct reference in a number of later films. We finish the course with a film by Martin Scorsese, My Voyage to Italy, where he describes the importance of Italian cinema to his career.

Any favorite experiences in your teaching career?

Students whose lives have been changed by taking one of my courses or participating in one of the programs I have directed. Just one example: There is one student who was a pre-vet major. She came with me to the Ubaye Valley in 2002. Overall, I would say she had a horrible experience. But during our trip, we went to Paris and she loved the 3 days we were there. She decided to go with me on the LSU in Paris program in 2003 and had the best time. She became a French major. The following year, she studied in Paris. And met a boy. Upon graduating, she went to Paris and for 2 years she worked as an English conversation teaching assistant in the public schools. She married her French boyfriend (who now works for Google in Silicon Valley) this past summer and now works in San Francisco for a publisher of French language texts. I was an honored guest at the wedding, since if it hadn’t been for her horrible experience in the Ubaye Valley, none of this would have happened. Her parents won’t let me forget that.

How did you get interested in the cinema? What was the attraction?

My brother took me to see Stanley Kubrick films when I was twelve and it’s been a love ever since. We had the Ken Cinema in San Diego and had the best times going down there to see weird films by weird filmmakers. It was just a natural attraction. I really was drawn to the auteur filmmakers and what they represented as human beings and artists. Werner Herzog’s films with Klaus Kinski (Aguirre, Fitzcarraldo, Nosferatu) just drew me in, not simply for the beauty of the films, but for the person of Herzog as filmmaker. The other films and filmmakers followed this same pattern of personal attraction.

I guess if it were a desert island, I wouldn’t need La dolce vita. I would probably want most def’ to have at the top of the list The Big Lebowski. I own only two films (the two listed here). So I guess, it would simply be The Big Lebowski. And if television shows are permitted, I’d have to have all five seasons of The Wire. Now I would hope to be on a deserted island with someone who has watched a lot of films so we could talk about them, though. Ultimately, it would be a bummer to be on a desert island by yourself.

Who are your favorite directors or actors?

The directors I like are all directors who I would describe as auteurs who are very particular in their visions and their styles: Federico Fellini (I love everything about his films). Werner Herzog. Again, he is so personally involved and present in his films. And the extremes he goes to realize his vision is awe inspiring—see Les Blank’s Burden of Dreams.

Agnès Varda—New Wave filmmaker who still is making films. Her films are personal, with non-traditional subjects and narratives style. They are often to some degree autobiographical—see Daguerreotypes and Les Glaneurs et la glaneuse/ the gleaners and I—but you should not miss San toit ni loi / Vagabond. Of course I love Akira Kurosawa (see Dersu Uzala the Hunter) and Stanley Kubrick. I’ve seen A Clockwork Orange so many times, Dr. Strangelove, Lolita—I am one of the few who really enjoyed Barry Lyndon—stop and look at frames of this film and you’ll see classical painting at its best. I really like the Coen Brothers (I started drinking white Russians after seeing The Big Lebowski). And I can’t tell you how many Saturday night midnight showings of John Waters films we saw at the Ken Cinema. Pink Flamingoes will always be in its own category along with Divine and Edith Massey. This film will never be remade for a mainstream audience. Jean Vigo—I hadn’t seen L’Atalante before teaching one of my French film class, and have been in love with this film ever since. The character Père Jules is one of the most unique characters I have ever seen in a film.

Finally (I’ve got to stop somewhere), Orson Welles: I spent a whole academic quarter as an undergrad in a class where the only film we watched over and over in minute detail was Citizen Kane. That really taught us to appreciate skill in filmmaking.

Have you made any films or videos?

When I was fifteen, I made a Super 8 film with a friend about a guy who goes to a junkyard and picks up odd parts and makes a device that destroys the world. When I was in my early twenties, I made a film with friends where the main character was protesting apartheid by making a staple chain for freedom. Then a few years ago, I made a film with my son making cupcakes. And two years ago at Thanksgiving my son and I made the film Turkey Neck. I have had other ideas for films, but simply have not had time. I love making movies.

You’re working on a Fellini project for this spring. Would you tell us a little about that?

I’m very excited about the Fellini project. First of all because Federico Fellini was so great and has had such an influence on world cinema and was such a dominant force in not only Italian film but in the arts as well. We’re linking two courses—my Italian 4100, which will be devoted to intensive study of Felllini’s works—and Trish Suchy’s FMA 4001, where they’ll be learning methods to make videos.

During spring break, we’re going to Italy to shoot in Fellini sites in Rome and Rimini. When we come back, we’ll edit what we shot into projects and have our own mini Felliniesque film festival. Academically and pedagogically this project ties together everything that I think education should be and presents both instructors and students with a unique opportunity to join academic “book learning” with practical hands-on experience as well as incorporating real life experience on-site in the culture and at the locations where Fellini lived and worked. This is really a one-of-a kind project that will have a life-long impact on all those participating.