By Harry Roberts and Irv Mendelssohn 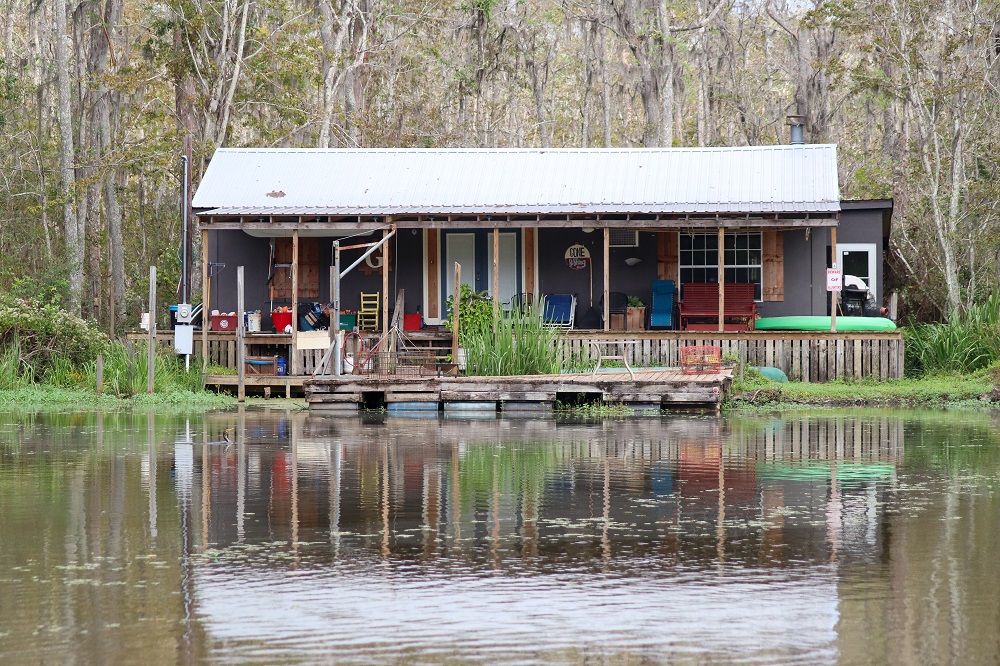 A camp along the bayou

The disappearance of Louisiana’s coastal wetlands has long been of concern, given the ecological services and societal values they provide as described by Dr. Jim Gosselink, an early chairman of the LSU Department of Marine Sciences, and his colleagues. Reasons for the loss of Louisiana’s coastal wetlands are numerous and have complex interactions. Dr. R. J. Russell, founder of LSU’s Coastal Studies Institute, was one of the first researchers to recognize that Louisiana was losing wetlands and that coastal plain marshes were changing composition. There was comparatively little scientific focus on this problem until Woody Gagliano and Hans van Beek wrote about wetland loss in the early 1970s. By the early 1980s, Gagliano and others published a surprising wetland loss rate of 130 sq km/yr which further encouraged coastal researchers to look into the various processes contributing to this significant problem for coastal Louisiana and how to slow or reverse wetland loss.

Causes of Louisiana’s wetland loss can be put into these general process categories: (1) oceanographic (sea level rise, wave erosion and saltwater intrusion), (2) geologic (subsidence from sediment loading and dewatering – compaction, faulting, and sediment deprivation), (3) biologic (nutria and muskrat marsh destruction), (4) catastrophic events (tropical storms and droughts), and (5) human activities (levee and dam construction, canal dredging, agricultural impoundments, and fluid withdrawal). It was recognized early in the investigations of the Mississippi River Delta plain that levees built along the Mississippi River extending throughout the alluvial valley to the modern Balize or “bird’s foot” delta stopped overbank flow and crevassing during annual floods. These flood-related processes supplied the coastal plain with sediment that helped to counterbalance subsidence, build substrate, and supply nutrients for wetland plant communities. Early researchers (Russell, McIntire, Fisk, and van Lopik) recognized that the coastal plain went through cycles of “construction” and “destruction” depending on the location of the Mississippi River. Delta-building and progradation of the coast occurred when the Mississippi River occupied a given location while the rest of the delta plain was starved of sediment and slowly deteriorated. Switching river courses was found to occur on a frequency of ~1,000-1,500 years. Explained as the “delta cycle” by Roberts, switching positions of the main Mississippi River channel built the Louisiana coastal plain over the last ~7,000 years, a period when the rate of sea level rise dramatically slowed following a rapid rise from the latest glacial maximum ~18-20 kyrBP.

Coastal researchers agree that leveeing of the Mississippi River in  the early 20th century, which cut off a sediment supply to the coastal plain, was a main cause that led to increasing rates of Louisiana’s coastal plain land loss. In addition, Turner and co-workers early on identified the dredging of access canals to oil and gas drilling and production sites as a cause of land loss by removing marsh, causing salt water intrusion, and altering sedimentation and marsh hydrology. Stone recognized that the combined effects of sea level rise and subsidence was enlarging our coastal bays. Because of increasing fetch, erosive wave energy along the marsh perimeter around the bays was also increasing. In addition to quantifying this wave energy that causes the marsh perimeter to retreat, he promoted rebuilding of Louisiana’s barrier islands as buffers to incoming normal marine wave energy as well as storm swells. Construction of dams in the drainage basin has caused the sediment load of the river to decrease by > 50%. A study by Blum and Roberts, using a sediment budget for the Mississippi River and growing accommodation space in the subsiding coastal plain, projected loss of almost all of the present coastal wetlands by 2100 if large-scale restoration measures were not initiated. Now, with an increasing rate of sea level rise and decreasing sediment load carried by the Mississippi River, the outlook for the coastal plain is bleak. Researchers from the Marine Sciences/Oceanography & Coastal Sciences Departments helped frame the causal processes of coastal plain land loss and have been involved in numerous investigations designed to counter or help slow loss of Louisiana’s valuable wetlands.

The survival and productivity of Louisiana’s coastal plain marshes depends on the influx and accumulation of sediment, which stimulates plant growth and builds substrate to offset the negative effects of subsidence. Both sediment accumulation and subsidence rates are difficult to measure. Delaune and Patrick were among the first to use 137Cs dating to measure sedimentation rates in accreting Louisiana marshes, documenting higher sedimentation rates in streamside marshes compared to immediately adjacent inland marsh zones and thereby allowing the former to better keep pace with relative sea level rise. They pointed out that in order to predict long term trends in marsh stability, accurate measurements of subsidence and sedimentation are needed. This research led to the documentation by Mendelssohn, McKee, and Patrick that interior marsh dieback and pond formation was a result of prolonged flooding and resulting soil waterlogging, inducing anaerobic soils, the accumulation of toxic hydrogen sulfide, and plant anaerobic stress. Using 14C dating of a number of long borings across the coastal plain, Roberts and Kuecher showed that subsidence rates increased with the increased thickness of Holocene sediments above the Pleistocene-Holocene boundary. Later, they found that most of the subsidence was taking place in the young deposits of the upper ~15m of the sediment column.

Because of subsidence and sea level rise, marshes are undergoing waterlogging and increasing salinity stress. Mendelssohn, McKee, and their students conducted critical experiments that identified the negative effects of rising water levels and increasing salinity on the viability of coastal marsh plants. They also showed that wetland plants were growth-limited by hydrogen sulfide. On a larger scale, Baumann and Day showed that deteriorating marshes receive most of their sediment during storms and stable wetlands during floods. Recent studies of the Wax Lake Delta and surrounding marshlands by Sasser, Delaune, White, and others emphasized the importance of the introduction of riverine sediments during floods to marshlands. This sediment was found to be an important source of nutrients for enhancing marsh plant productivity and substrate building to offset the negative effects of subsidence. They found that cold front related processes drove sediment-rich waters from Atchafalaya Bay into the marshlands, making the marshes surrounding the bay some of the most productive in the Louisiana coastal plain. This body of research, in conjunction with the ecological and biogeochemical research of Mendelssohn, Delaune, White, Gosselink, Sasser, and others, and the flood-pulse research by Day, validated the use of sediment diversions and hydraulically dredged sediment-slurries for wetland restoration, the two primary restoration approaches employed by state and federal agencies as part of Louisiana’s Comprehensive Master Plan for a Sustainable Coast.

Research conducted by the faculty of the Department of Oceanography & Coastal Sciences has identified the many critical components of wetland loss, their relative importance, physical, geological and biological mechanisms determining wetland loss, and restoration approaches to help mitigate impacts to one of the world’s great wetland systems. Future departmental basic and applied research will continue to tackle these, and future challenges to our understanding of the suite of interacting coastal processes that control wetland loss and successful restoration.