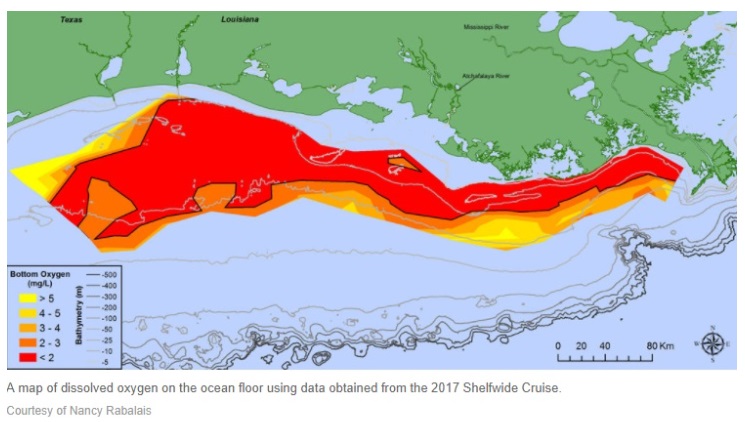 A map showing the size of the Gulf of Mexico hypoxic zone in 2017.

The studies of low oxygen bottom waters in the northern Gulf of Mexico adjacent to the Mississippi River are now a part of the legacy of many researchers. Initially, however, there was the lone Louisiana State University (LSU) scientist, R. Eugene Turner, a new assistant professor in the Department of Oceanography & Coastal Sciences (DOCS), who recognized the importance of low oxygen conditions (hypoxia) as a phenomenon to be studied more deliberately. He took advantage of the National Oceanic and Atmospheric Administration’s (NOAA) Southeast Area Monitoring and Assessment (SEAMAP) cruises on the RV Oregon II groundfish surveys in 1975 and 1976 from Mobile Bay, Alabama, to Atchafalaya Bay, Louisiana, to document dissolved oxygen concentrations in the Louisiana Bight west of the Mississippi River to be low in dissolved oxygen. The oxygen deficiency in the bottom waters became known as a ‘dead zone,’ because of the poor capture of shrimp, crabs, and shrimp in trawls within its area. Dr. Turner’s findings of hypoxia in the Louisiana Bight brought attention to a formidable situation in Louisiana’s coastal waters of environmental degradation that should have been addressed. The low oxygen concentrations in the summer did not, unfortunately, elevate the issue of low oxygen in northern Gulf waters to an issue of environmental significance at that time by federal and state agencies.

In the next decade, the Louisiana Universities Marine Consortium (LUMCON) became established at a Marine Center in Cocodrie, Louisiana, and provided resources to continue these studies. The oceanographic fleet of LUMCON in 1985 provided a humble beginning to offshore expeditions in the form of a 20-ft outboard and a donated, but aged (to be polite), donation from LSU of the RV R. J. Russell. [An aside: The vessel was named for the geologist R. J. Russell of LSU’s Department of Geology, LSU’s first member of the National Academy of Sciences, who adamantly stated several times that LSU should never own a research vessel. Cruises on the Russell were more than a little rocky and a more than a little leaky.] The first Executive Director of LUMCON in 1979, Dr. Don Boesch, was able to convince NOAA through U.S. Senator John Breaux, that the issue of oxygen deficiency in the Gulf was a suitable and critical issue for living resources. This successful contact released research funds from NOAA to study the issue. Boesch fared from the Chesapeake Bay, knew the science of eutrophication and low oxygen there as well as the increase in the nitrogen load in the Mississippi River and earlier documentation of ‘dead waters’ by trawlers in the northern Gulf of Mexico. Many scientific colleagues contributed to elevating the science of oxygen depletion in offshore waters and will be identified below.

Enter Dr. Nancy N. Rabalais in 1983 as a new research associate at LUMCON, who eventually rose through the ranks at LUMCON and was its executive director from 2005-2016. She held an adjunct professor title in DOCS and is now a full professor in the department. She began forays into the Gulf in 1984 to document the low oxygen events on the 21-ft outboard and on the R. J. Russell off Terrebonne and Timbalier Bays. Fortunately, the RV Pelican entered the LUMCON oceanographic fleet in 1985, and the smaller RV Acadiana entered in 1986. These vessels increased considerably the safety level of working offshore and allowed for longer research expeditions. Dr. Don Boesch, as the director of LUMCON, garnered NOAA funding and introduced Dr. Rabalais to, as Boesch said, her “aquatic ecologist,” Dr. Gene Turner, and her “physical oceanographer,” Dr. Bill Wiseman, both from LSU DOCS and quite established in their careers. They would work together on a study of low oxygen conditions in the northern Gulf of Mexico and the processes behind its formation. The trio forged a solid interdisciplinary and collaborative group that included Dr. Quay Dortch, a DOCS adjunct faculty member, and took the science forward and was successful in maintaining a funding level from NOAA through competitive research grants to maintain the 1985- 2021 (present) study of low oxygen in nearshore Louisiana waters.

Dr. Dubravko Justic joined Drs. Turner and Rabalais in 2001 as a Fulbright Scholar from what was then Yugoslavia and now Croatia. He is an ecological modeler with an interest in aquatic systems. He is now a professor in DOCS and acknowledged as a premier modeler of linked dynamic oceanographic and water quality systems for understanding coastal ecosystems. He was joined by other modelers, Drs. Chunyan Li and Hao-Shen Wang of DOCS, in modeling water circulation and particle movement on the Louisiana shelf. Dr. Kenneth Rose, formerly of DOCS and now with the University of Maryland Center for Environmental Science, contributed to the modeling of fish movements. Many DOCS graduate students and visiting scientists and graduate students from across the U.S. have joined the research team in new disciplines and are often on the research cruises. These new research directions further advanced understanding of the dynamics of this system and others, globally. The program, through its multiple collaborations and research approaches, brings an ecosystem-level understanding of linked watershed and nearshore coastal ecosystems.

The research program and consistent funding for multiple cruises over time contributed to integrating physical, geological, chemical, and biological sciences within a complex land/ocean interface that arises from multiple shifts driving human-influenced ecosystem changes. The now 36-year data record (1985-2021) is not only unique, it identifies the mechanisms of development and maintenance of hypoxia, implications for fisheries management, and describes a detailed and integrated biogeochemical mechanism of oxygen loss from an ecosystem. The long-term data support the conclusion that there is an increased severity in low oxygen over time, link those changes to shifts in nutrient loads and their ratios to each other, and posit the northern Gulf of Mexico coastal ecosystem as the second largest human-caused oxygen deficient zone in the world’s coastal ocean.

There was a time when the idea that nutrients from the Mississippi River could cause the formation of the low oxygen zone in the northern Gulf of Mexico was uniformly dismissed, but the results substantiate this conclusion. The increased load of nutrients from the Mississippi River to the Gulf of Mexico is well established, and the physics supporting the formation of the low oxygen conditions remains variable but fairly consistent over time. Reducing nutrient concentrations in the Mississippi River brings attention to the watershed and addressing land use far from the coast. Dr. Rabalais testified before congressional subcommittees about the influence of both harmful algal blooms and low oxygen; the team helped develop the strategic information leading to a federal/state/tribal task force to study the issues and eventually formed the Hypoxia Task Force. Their peer-reviewed literature led to policies that elevated hypoxia in ways that eventually overcame, but not completely, the state agencies’ views that hypoxia was not a particularly important issue. The use of Mississippi River waters and sediments in diversions for coastal restoration remains an important issue for Louisiana’s future. The land/ocean interface is not healthy. Research and mitigation within the Mississippi River Basin and in the Gulf of Mexico are imperative to restoring a healthy offshore ecosystem.