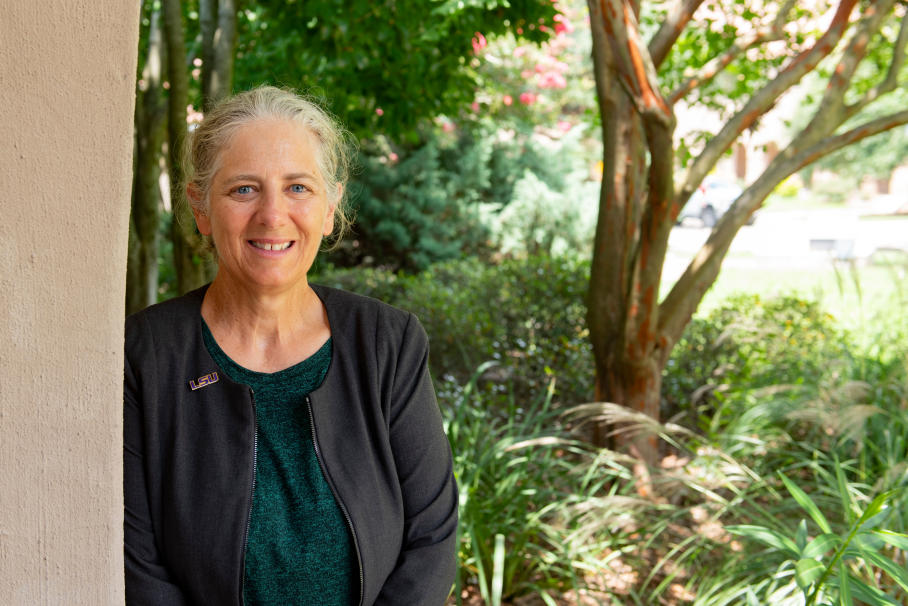 BATON ROUGE—Eleven miles east of LSU's sprawling campus stands an elementary school playground with modern equipment encased by a seemingly out-of-place red gate. No one would begrudge the biological engineer and her student team for removing it in favor of a sleeker design to match its updated surroundings.

Yet, the gate remains rooted at Twin Oaks Elementary School—a stark reminder of community engagement's ultimate goal: to make the world a better, more beautiful place through meaningful conversations and purposeful actions. It was assumed that this entry point to an open field was an eyesore that the school would want to be taken away, so the engineer inquired about why it had been left behind. The principal shared that this gate had been the students' favorite (and almost only) piece of play equipment at recess; because as they ran through it, teachers told them to imagine being at any place in the universe. Realizing she had made a mistake in judgment, she and her team left the gate untouched. 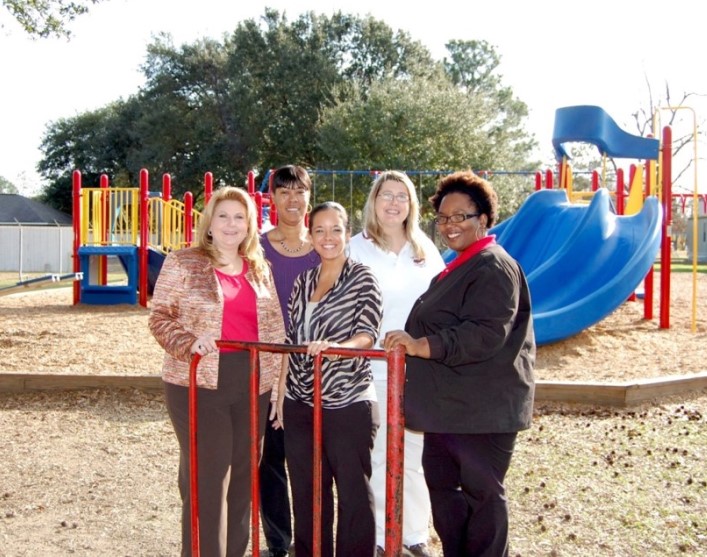 Administrators from Twin Oaks Elementary School pose with the red gate that teachers and local children once used as play equipment before assisting Lima and her CPP team with building their current playground. [This photo was taken before COVID-19 guidelines were mandated.]Photo Credit: Submitted by Marybeth Lima

Dr. Marybeth Lima, chair of LSU's Biological and Agricultural Engineering department and Cliff & Nancy Spanier Alumni Professor, credits this once "Gate to Nowhere" as one of the signposts in her professional career that also aligned perfectly with her personal life.

"If you can change your perspective, a gate to nowhere can really be a portal to anywhere," she remarked. "Maybe we all need to learn how to do that. We can look in our own lives and see gates to nowhere, [but] what little change can we make to turn gates to nowhere into portals to anywhere?"

Lima, or "Mb" as she is affectionately known to many, is recognized locally and nationally for her service-learning approach to playground builds and design projects that have brought more than safe areas of fun to more than 35 locations, mostly in East Baton Rouge public schools. She also served as director of the Center for Community Engagement, Learning, and Leadership (CCELL) from 2010 to 2018, facilitating hundreds of service-learning partnerships for the university and making the world beautiful around her as a result. For this reason, CCELL established the #MakeBeautiful campaign to commemorate Lima's living legacy.

Still, it would not surprise anybody who knows her that she does not entirely view her tireless work as the primary agent of change the way others do. Instead, she centers civic engagement and its effect on the human condition and the shared environment as the true catalyst of beauty.

"I don't feel like [it's] anything I'm doing to make the world beautiful," Lima explained. "It's just more having a chance to witness the beauty of life and what happens when people who are very different, maybe may not agree on something massive, can still figure out how to make a difference in a profound way or maybe a small way."

Using everyday tools like patience, perseverance, and passion, Lima approached her first role as an administrator like she makes any trip into a new community: ready to listen, learn, and do the work together. However, it proved to be more challenging than she expected; after less than two weeks as director, Louisiana's education department cut $84 million higher education to close a $247 million deficit in the 2009-2010 budget. Although she described that first year as "pretty stressful," she forged onward with her trademark positivity and optimism.

"Being able to carry on that legacy was really important to me so it felt purposeful and meaningful," she remarked before adding, "And I loved the people I worked with." 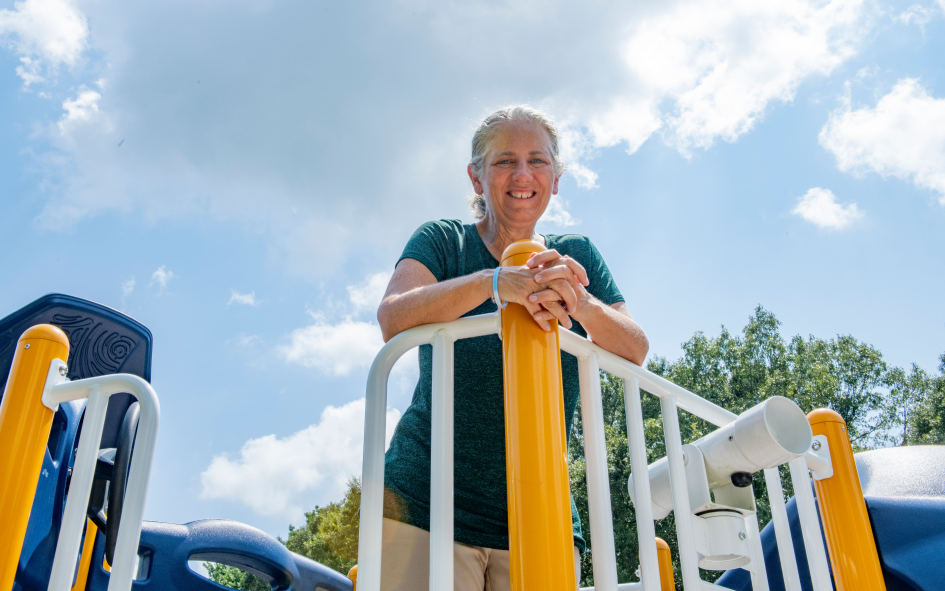 Marybeth stands atop one of the playgrounds she and her Community Playground Project team built in East Baton Rouge Parish. Photo Credit: Submitted by Marybeth Lima

Cultivating partnerships with LSU faculty, staff, and students, and community partners across Louisiana have made CCELL synonymous with community engagement across campus. Among its many accomplishments during her tenure, the Center was honored with the 2015 Community Engagement Classification by the Carnegie Foundation for the Advancement of Teaching. Through the Center's Service-Learning Faculty Scholars and Community Engaged Researcher Scholars workshops, she has helped professors and instructors across disciplines implement service-learning in their existing courses and research proposals, respectively.

“Stepping into a role Marybeth Lima once occupied, after being mentored by her and by former director Jan Shoemaker, is the biggest honor of my career, to date,” said CCELL Director and Sociology professor Dr. Sarah Becker. “While it can sometimes feel like I have really big shoes to feel, the dedication to justice, kindness, and connection I have always witnessed in MB’s interactions with others make learning my new role much easier because I have such a great model to draw on.”

Under Dr. Becker's leadership, the Center continues its legacy of being an integral "bridge-builder" between the community and the university, much to Lima's delight.

Her connections to CCELL date back to 1998 (or as it was then called, LSU's Program of Learning Through Service), when she met the director Jan Shoemaker. Lima had taught BE 1252: Biology in Engineering class for a year, but Shoemaker's mentorship improved the class's service-learning aspects such as reflection and being intentional with civic learning.

Lima embraced these changes and launched one of the most successful service-learning programs in engineering to date. When the university selected her to succeed Shoemaker as CCELL director in 2010,  no one was more supportive than Jan.

“I was thrilled when someone of Marybeth’s vision and national reputation became CCELL director,” she said. “And as expected, she advanced the program to become a beacon of inspiration for students, faculty, and community. Our world is indeed more beautiful because of her leadership and role model.” 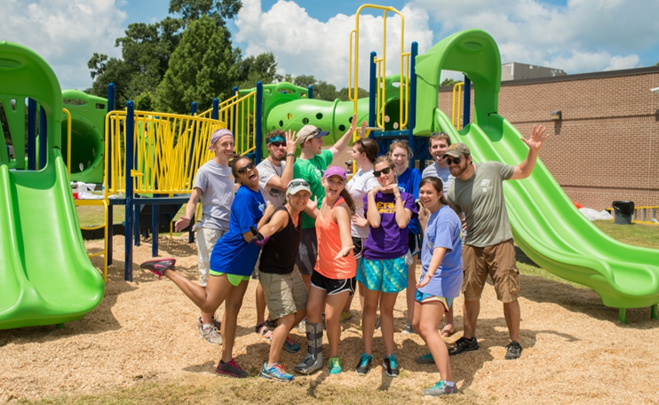 Marybeth and her CPP team celebrate after building a local playground. [This photo was taken before COVID-19 guidelines were mandated.]Photo Credit: Submitted by Marybeth Lima

As director and service-learning professor during her tenure, Lima's list of collaborators includes countless students, numerous faculty and staff, and many community partners. For Lima, witnessing how people and environments transform over time has been the most beautiful aspect of offering this high-impact practice as part of her curriculum.

"It's sort of like magic when you get to watch a student find their footing in life or on a college campus," she described. "It's community members, too. I've worked with so many schools on co-creating playgrounds with kids. I've watched their confidence grow as they talk about their visions of play, and they start to see how their visions are imported and can be translated into built environments."

Similar to the playgrounds that she and her Community Playground Project (CPP) team have designed and built across the parish, Lima has assembled a legacy that will endure and endeavor to make the world more beautiful.

“From her first playground builds, she inspired everyone who met her and many more who just heard about her work,” Shoemaker said, before elaborating on Lima’s far-reaching influence: “…[From] students learning viable skills to practice their chosen professions in ways that bring about positive and sustainable change, to faculty imagining ways to integrate service and learning in fields and classes that they might never have considered, to community partners trusting their own expertise and sharing it with academia, and to administrators like me dreaming big and to follow through to live up to her role model.”