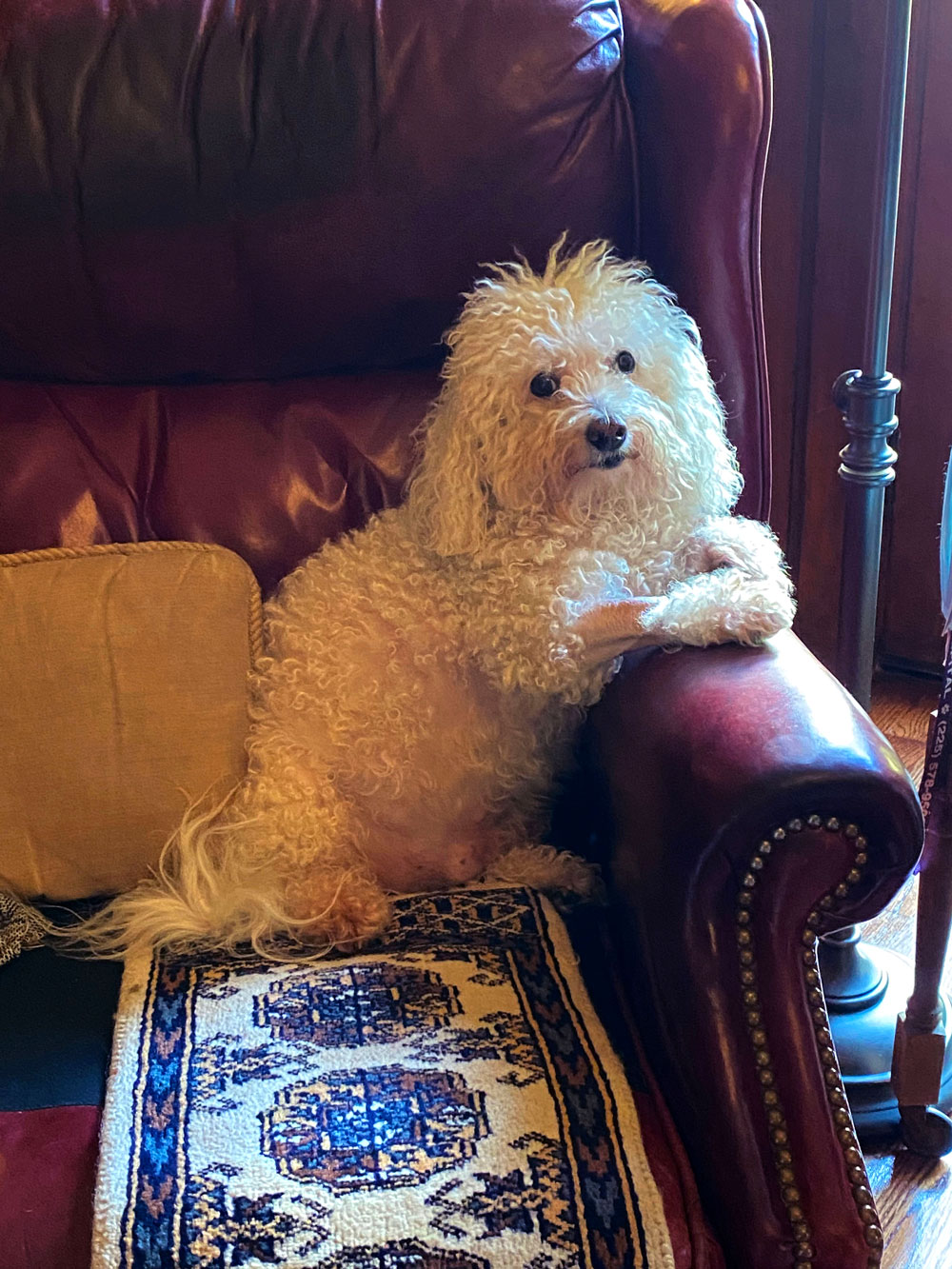 In late May, Oliver, a Bichon Frise, and his best friend, Larry, set out on their walk through the Garden District as they did each morning for all of Oliver’s 13 years. However, this particular day turned out to be anything but usual.

While leashed and trotting ahead of Larry on the sidewalk, Oliver suddenly jumped and yelped. His began frothing at the mouth, tongue hanging. Larry got him home, where the dog gulped a whole bowl of water and thrashed on the floor, crying out in pain. Larry called the Garden District Animal Hospital and their regular veterinarian, Andrea Andersen, DVM (LSU SVM 2008), told him to take Oliver straight to the LSU School of Veterinary Medicine.

“They were expecting us when we pulled up. Two seconds after we arrived, it looked like a triage scene from MASH. They came running, grabbed Oliver, and took him inside the hospital. Someone yelled that a team member would be out soon to update me,” said Larry.

“He came in as a respiratory distress case. We determined his chest and lungs were clear. He was in pain, his heart rate was up, he was restless and anxious. He had hives all over his belly. We could see two puncture wounds on his left forelimb,” said Mallory Horridge, DVM, emergency and critical care resident, who palpated his legs, found some swelling, and got his pain under control.

About an hour after Oliver was whisked into the hospital, Dr. Horridge informed Larry that they’d gotten Oliver stabilized. He instructed her to do whatever they needed to do to treat Oliver.

Larry waited in the LSU SVM parking lot as Oliver was assessed, diagnosed, and treated. After physical examinations and a series of tests, Oliver’s clinical team diagnosed the dog with a snake bite.

Oliver was transferred on anti-histamines and pain medications to the LSU SVM’s Internal Medicine service, where Tifini Batts, DVM, MSPH, internal medicine resident, assessed him further. The Internal Medicine team discussed the case, did blood work, and took radiographs of his forelimb to ensure there was no bone injury and radiographs of the chest to rule out any underlying respiratory disease.

“Generally, there is pronounced swelling and pain at the site of a bite within minutes. Getting the animal to a veterinarian quickly is important. The sooner we see them, the more we can do to help them. Assessment is key,” said Ryan Smith, DVM (LSU SVM 2009), DACVECC, assistant professor of emergency and critical care.

Snake venom can cause animals to go into shock, extensive tissue damage, and blood coagulation problems. Small dogs and puppies are particularly susceptible to the effects of snake venom. If there are signs of a systemic reaction, antivenom is administered. Antivenom is an antibody product that can neutralize toxins. If injected quickly after a bite, it can save lives, limbs, and tissue.

“The decision to administer antivenom is not made lightly because it is not a benign agent. It is produced using a purified serum from other species, such as horses and sheep. It is a foreign substance to a dog, and the dog could develop a reaction,” Dr. Smith said.

The LSU SVM sees dozens of snake bite cases per year, but the mortality rate is low, about 4-5 percent.

Most snake bite effects stay localized, as in Oliver’s case. He received fluids, pain management, and other supportive care.

“I was frantic when I brought him in to the vet school. Oliver does not leave my side. He sleeps on my bed. I haven’t taken one vacation if I couldn’t take him with me,” said Larry, who first brought Oliver’s Twisted Delight (his full name) home when he was just eight weeks old and Larry was recovering from cancer surgery.

According to Larry, several clinicians remembered Oliver from five years ago, when the dog suffered a spinal injury and was cared for at the LSU SVM. He underwent six months of crate rest, and during that time, Larry had to carry Oliver whenever he needed to go outside. “One morning, Oliver started walking again, and then he took off running,” Larry said.

Even though Oliver has proven to be resilient, Larry doesn’t take chances with Oliver’s health. They have altered their morning routine, crossing streets on walks when they encounter areas that are dense with growth where snakes could hide. Larry remains vigilant while enjoying walks through the neighborhood with his best friend.

“If I hadn’t had Oliver during quarantine, I don’t know if I would’ve made it through,” Larry said.