Caring for the General’s Horse

When Lt. Gen. Russel Honoré’s beloved horse, Big Red, needs medical attention, he brings him to the LSU School of Veterinary Medicine, where Big Red receives care from a multi- 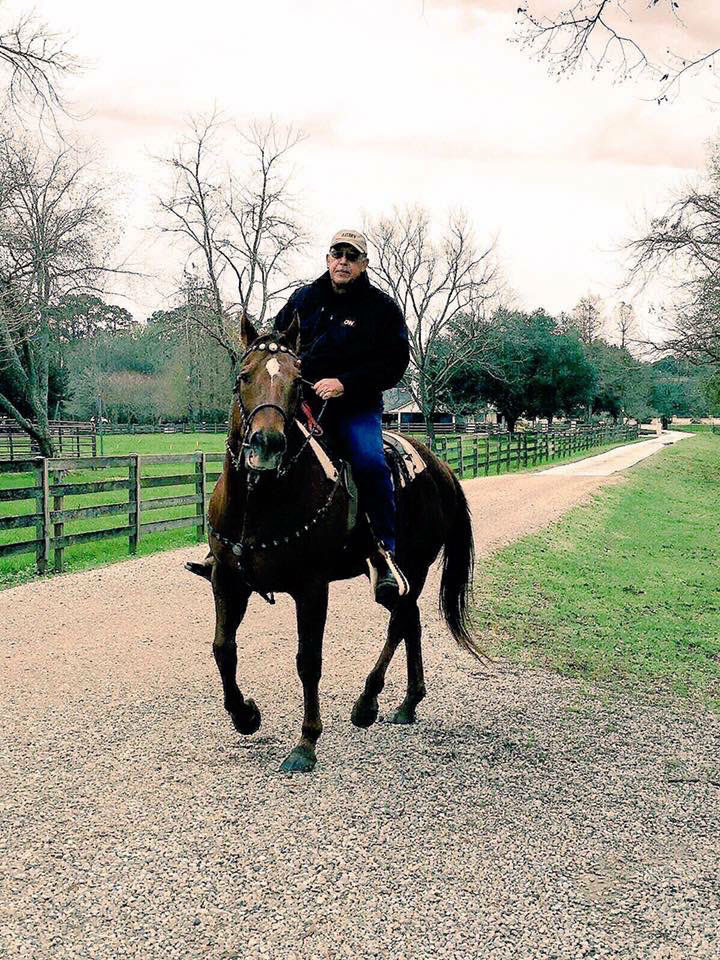 The general’s horse attracts legions of fans on social media who follow updates on his health posted by Lt. Gen. Honoré, who has his own army of devoted admirers for his post-Hurricane Katrina life-saving relief efforts. Fans regularly inquire about Big Red’s health and post well wishes for him.

In September 2021, Big Red was limping and having trouble urinating. He was brought to LSU Vet Med’s Large Animal Hospital and was seen by clinicians specializing in equine medicine, surgery, and podiatry with a therapeutic farrier who specializes in custom horseshoes. Big Red was diagnosed with the beginnings of kidney disease. When he returned for his one-month checkup, veterinarians discovered a hoof abscess possibly caused by blunt trauma.

His care was coordinated between various hospital services, ensuring that medication prescribed for his feet would not put extra strain on his kidneys.

“Because he’s older, his kidneys don’t function as well as before. There are no specific medications for this condition. His most serious issue is his front foot. He has ongoing chronic issues with both front feet due to thin soles. Keep in mind that horses bear 60 percent of their weight on their front legs,” said Rose Baker, BVMS, assistant professor of equine internal medicine and lead veterinarian during his latest visit to the Large Animal Hospital.

Dr. Baker worked in collaboration with Jonuel Cruz, DVM (LSU 2015), of the equine surgery service to provide comprehensive care of both his medical and orthopedic needs.

During Big Red’s recent hospital stay, clinicians kept his hoof area clean to prevent infection. And he was fitted with a custom shoe designed and built by Clay Curry, therapeutic farrier for LSU. Forged of steel with a wedge pad to correct bony alignment in his hoof, a cushioned shock absorber was added to relieve pressure and add comfort. The shoes were fabricated at the LSU Large Animal Hospital in Curry’s mobile farrier unit.

“We build a strong working relationship between the farrier and veterinarians. As surgeons, we express an idea to the farrier and then listen to what he has to say. He brings extensive experience from a slightly different angle to help solve the same problem,” Dr. Cruz said.

“Big Red’s care is a mixture of science, experience, and judgment. Each person on the team has a respected body of knowledge that contributes to his healing. All are experts working together to do what is best for the animal,” Lt. Gen. Honoré said.

While Big Red was hospitalized, the general called every morning to receive updates on his horse’s condition. Alasdair Botting, DVM, equine internal medicine house officer, was his primary point of contact with the clinical team. With Big Red’s newly fitted shoe and abscess healed, he was released after seven days hospitalized. When the horse was led back into his home pasture, he felt well enough to take off running and roll around in the grass.

Each day, Big Red waits at the fence for Lt. Gen. Honoré, who visits him in the morning and afternoon and feeds him his evening meal. The horse, now fully mobile, comfortable, thriving, receives checkups at LSU Vet Med every four to six weeks.

“He gets comprehensive care at the vet school. It’s by luck that we are nearby, and my horse can be healed at one of the finest vet schools in the country. I couldn’t have planned it any better,” said the Baton Rouge resident who received Big Red as a retirement gift in 2011 and has been bringing him to LSU Vet Med ever since.

What is it like to care for the horse of a man who has been called an American hero, a high-profile general with exacting standards?

“Knowing you’re helping someone who has done so much for Louisiana is very fulfilling. I told my team member, who is not from the U.S., ‘This guy is kind of important,” Dr. Baker said.

“Lt. Gen. Honoré likes having a plan. He’s very to-the-point. He also listens well and is very receptive to our treatment plans. When we explain the best ways to address Big Red’s problems moving forward, the general tells us, ‘Whatever he needs—I want what’s best for him,’” Dr. Botting said.

Equine veterinarians who have cared for Big Red over more than a decade include Drs. Laura Riggs, Frank Andrews, Mustajab Mirza, Anne Chapman, Heidi Banse, and Britta Leise. Cherie Pucheu, DVM (LSU 1992), PhD, DACVD, associate professor of veterinary dermatology, also has seen Big Red. They say he is a sweet, affable horse who cooperates with care providers even when he is not feeling his best.

“We’ve all had a chance to put our hands on him,” Dr. Baker said.

Mustajab Mirza, DVM, DACVS, associate professor, came in on a Sunday (his day off) to treat Big Red when he had colic. Lt. Gen. Honoré remains grateful and slightly in awe of his dedication.

“At the LSU vet school, they know Big Red is family to me,” he said.

It was love at first sight for the general and Big Red, who was given to the general 11 years ago from Harvey Honoré as a retirement gift.

“When I first rode him, he was calm, pulled to a full stop and stayed still. He’s one of the most well-broken horses I’ve ever encountered. He’s not easily spooked,” said Lt. Gen. Honoré.

Big Red’s original name was Crimson Pie, after his father, Pie-in-the-Sky, a winning racehorse descended from the famous Man-o-War. His inner lip was tattooed with a number for racing. However, racing wasn’t his forte, and the registered Quarter Horse spent eight years as a cow horse on Louisiana politician Foster Campbell’s ranch before the general claimed him as his own.

Growing up the eighth of 12 children in rural Lakeland, La., in Point Coupee Parish, Russel Honoré rode horses on the farm his family rented. He worked on a dairy farm from age 12 until he graduated from high school. Rising at 4 a.m., he mounted a horse, and led cows to the barn for milking. The dairy farmer’s son was a veterinarian, and young Russel aspired to enroll at LSU Vet Med and become a veterinarian.

He belonged to 4-H and showed Guernsey cows in New Roads, La. While a student at Southern University, he milked cows on the weekend and bought his first horse, Big Dan.

His lifelong association with animals is deeply rooted in his Creole heritage.

“I loved to listen to the old Creole men sit on the porch and tell stories of their youth while sharing a half pint of Bourbon de Luxe. They talked about their mules and took pride in them because they were central to their livelihood. The mules plowed the gardens, cut the hay, brought in the corn and sugar cane. They laughed about how cantankerous the Creole mules of South Louisiana were.

“I admired the old men because they were telling the story of America. These were stories of survival, of raising families and crops and depending on animals. They ate well and shared their resources. Their stories were of the human experience. It was a simpler time,” he said.

He recalled seeing how the Creole men he admired were treated when they went into town, and it still saddens him as he describes those memories while seated outside the LSU Large Animal Hospital on a sunny afternoon wearing a cap emblazoned with the word ARMY.

He had enrolled in the Army ROTC, a four-year commitment, while a student at Southern. After graduating with a B.S. in vocational agriculture he answered the call to serve our country in the U.S. Army. During his 37-year military career, he rose through the ranks and retired from the U.S. Army as a three-star general in 2008.

No matter where the general is in the world, he never misses a day of calling to check on Big Red.

The LSU School of Veterinary Medicine is one of only 32 veterinary schools in the U.S. and the only one in Louisiana. The LSU SVM is dedicated to improving and protecting the lives of animals and people through superior education, transformational research, and compassionate care. We teach. We heal. We discover. We protect.