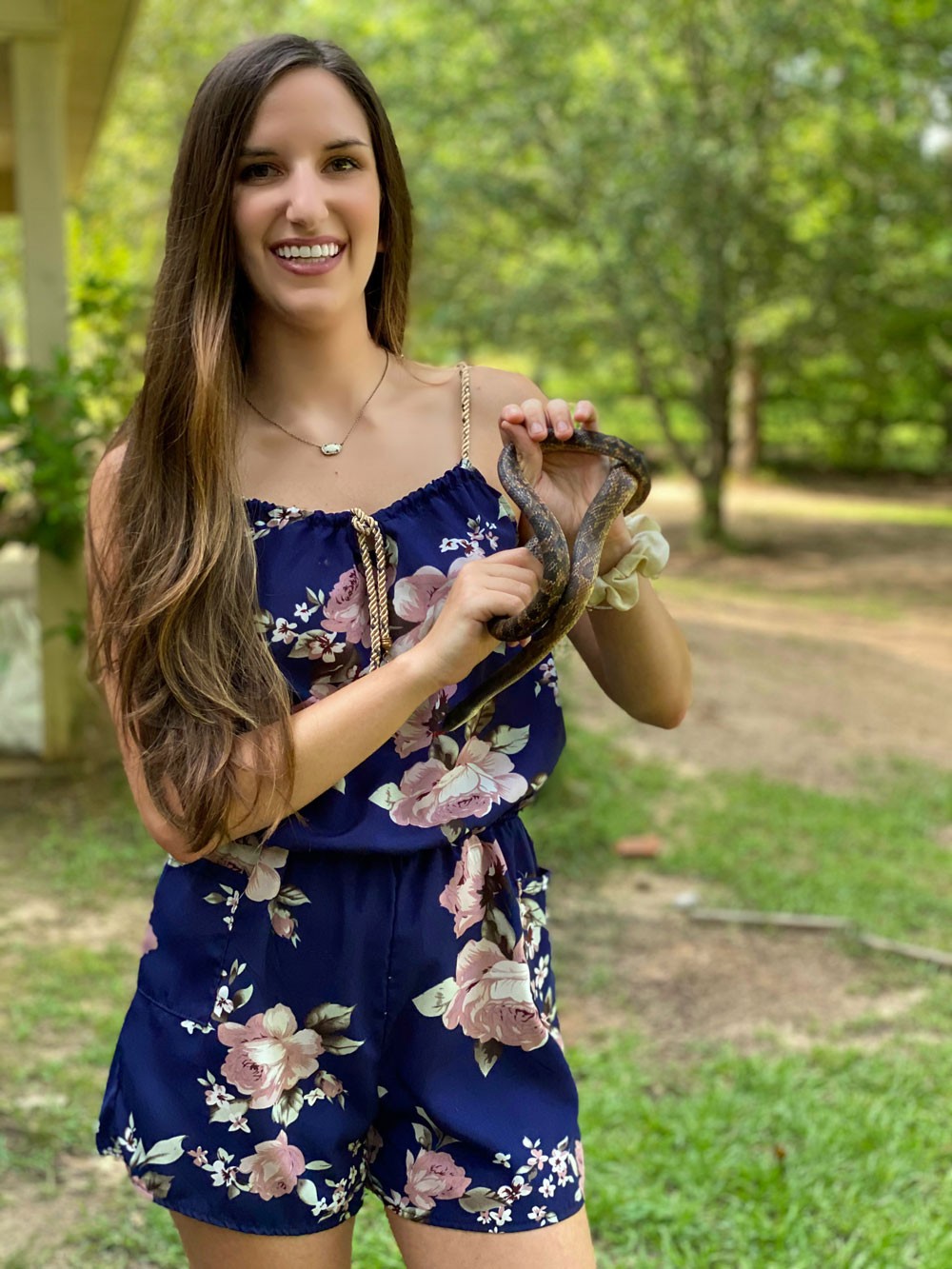 In honor of Native American Heritage Month, we spotlight Lindsey Newton, an enrolled member of the Four Winds Tribe, Louisiana Cherokee, based in Rosepine, La. Lindsey grew up in rural Dry Prong, La., within the Kisatchie National Forest, 22 miles north of Alexandria.

As a child, connecting with nature was her family’s form of therapy. If times were challenging, her mother would ask, “Have you gone outside, put your bare feet on the earth, walked through the forest?”

Lindsey grew up with an awareness that she had Native American ancestry, but it wasn’t until she was 17, when her family conducted genealogic research, that ancestry confirmed she was of Four Winds Cherokee heritage.

“Suddenly, I understood why nature was sacred to us. I had a feeling of ‘Oh, this is why.’ Knowing my Native American heritage gave me a sense of belonging,” said Lindsey, a second-year student at LSU Vet Med.

As an undergraduate student, she worked for two summers as an avian field technician for the U.S. Forestry Service in Kisatchie National Forest and presented research at the Louisiana Association of Professional Biologists 2019 Symposium. Her LSU degree in wildlife biology was a planned step toward veterinary school, a life-long goal.

When Lindsey was in preschool she wrote “in chicken scratch handwriting with misspelled words,” I want to be a veterinarian. She believes her career choice is interwoven with her Native American heritage rooted in nature.

Lindsey has always lived her life with an understanding of the interconnectedness and unity of all life. “There is no part of the ecosystem that can function without the other parts of the whole,” she said.

While she didn’t have an opportunity to partake in Native American ceremonies and festivities when she was young, she enjoys seeing her niece and nephew, children of her brother and his Choctaw wife, do traditional dances and fancy dances with shawls.

Lindsey wants to be a role model for Native American children. She hopes to do outreach events through The VOICE Club at LSU Vet Med, which celebrates multiculturalism within the profession of veterinary medicine and works to promote the importance of cross-cultural awareness. Lindsey serves as treasurer and fundraising chair of VOICE.

Positive role models can make a difference for young Native Americans and bolster self esteem, particularly when difficult comments are aimed at them. In Lindsey’s experience, these comments often come in the form of bad jokes. “I was told recently, ‘You don’t look like you’re Native American.’ Some people think we all wear moccasins and feathers in our hair. They don’t see us as contemporary people living our lives,” she said.

Looking ahead at when she becomes a Doctor of Veterinary Medicine in 2024, she foresees a career in wildlife or zoo conservation medicine. “Conservation medicine also involves habitat restoration because endangered species that are so precious to us have their habitat threatened at alarming rates. I want to make a difference somewhere where I can be connected to wildlife,” she said.