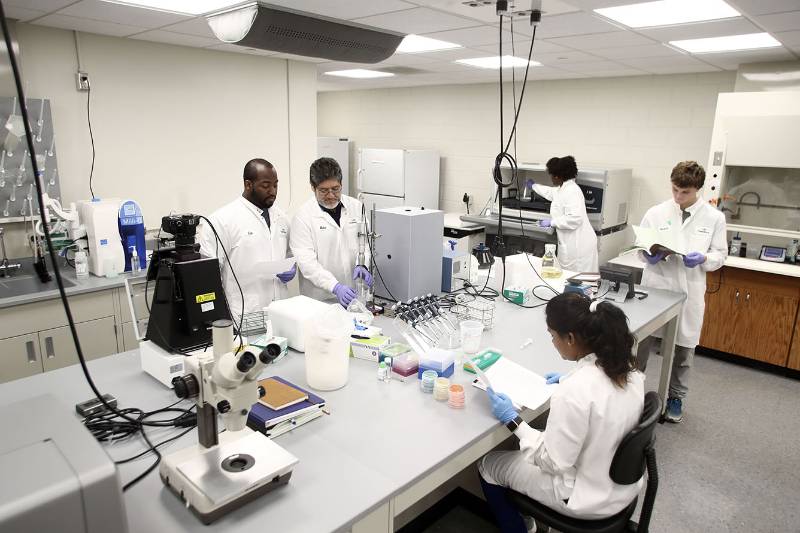 Dr. Mario Rivera and his lab team working in his lab located in Choppin Hall.

The development of penicillin in the 1920s revolutionized medicine, and the 1950s explosion in new antibiotic discoveries marked a giant leap forward. But the discovery of new antibiotics has stalled in the last three decades, while bacteria continue developing resistance to existing antibiotics.

Now LSU scientists are disrupting the metabolism of bacteria in an effort to open the door to new antibiotics.

As Professor and inaugural William A. Pryor Chair in Chemistry, Mario Rivera helps drive LSU’s collaboration between scientific disciplines. Focused on the interface of chemistry and biology, his team works to help combat disease by conducting  studies aimed at gaining detailed understanding of chemical and biological processes at the molecular level.

During the golden era of discovery, antibiotics were often obtained from bacterial cultures, but that source of discoveries has dwindled, Rivera said. Pharmaceutical companies have attempted to develop new antibiotics—with limited success—and several newer antibiotics are mainly derivatives of existing ones.

Today there’s a pressing need for new antibiotics as bacteria—especially hospital-dwelling superbugs—grow resistant to the trusted drugs of the past. And because antibiotics are usually taken for a limited timeframe before “getting well,” they don’t have the profit potential of other drugs that people take all their lives.

“It’s really a perfect storm,” Rivera said, “of a difficult problem with very little promise for making a lot of money. That has been left, then, mostly to people in academia and small startups.”

With an eye toward developing the next antibiotic, Rivera’s cross-disciplinary research team is testing a new strategy to fight bacteria. Specifically, the group is trying to demonstrate that dysregulating the iron balance by breaking specific protein-to-protein interactions in the bacterial cell will disarm bacteria. The LSU team is focused on this core research question:

Ironing out the science

In order to thrive, pathogens like the Pseudomonas aeruginosa bacteria Rivera is studying have to meet their own nutritional requirements. That means an appetite for iron.

But the body’s immune system, recognizing the bacteria as an invader, works in conjunction with other proteins to limit the amount of free iron available. By utilizing nutritional immunity, an ancient process of our immune system, our bodies naturally try to deprive pathogens of the iron they need to live.

“The immune system will try to starve the invading pathogens,” he said. “That’s how the body very effectively prevents bacteria from growing rapidly in us.”

So how does the body put up a fight? Certain molecules and proteins bind the free iron very tightly so that pathogens can’t take it.

This immune system action sounds foolproof. But if the iron-hoarding process was a perfect deterrent, there would be no diseases. Instead, pathogens have evolved mechanisms to declare chemical war on the immune system.

“The bacteria make molecules of their own to fight for the iron,” he said. “It’s really a contested war. One side is trying to prevent the other from getting the iron.”

When the immune system prevails, iron-hungry bacteria starve. But when bacteria win by bringing in iron, they’re able to grow and cause infections. 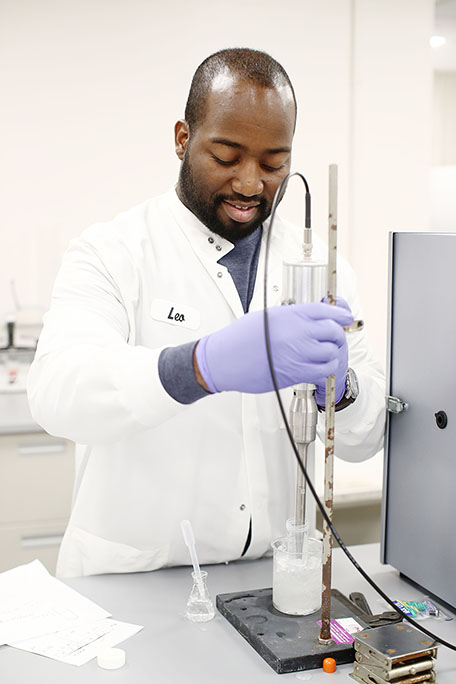 Although iron is an essential nutrient for the bacteria, too much can be toxic. The sophisticated internal machinery of the bacteria constantly regulates iron concentrations—bringing it in, utilizing it as needed.

This balanced state is called bacterial iron homeostasis. Iron concentrations are at the right levels for the bacteria to thrive. Not too little, not too much.

Bacteria produce molecules known as bacterioferritin (BfrB) that store iron in an internal cavity. The stockpiled iron can become a source of nutrients for the cell, but only after mobilized from that cavity.

Before it can move outside the cavity, the iron must be converted from iron(III)—known as Fe3+ (an Fe atom missing three electrons)—to iron(II)—known as Fe2+ (an iron atom missing two electrons). To make that conversion, a small protein (Bfd) binds very specifically to the large bacterioferritin, and that allows electrons to flow into the bacterioferritin cavity and convert iron(III) into iron(II).

The vision for new antibiotics

The LSU team is trying to develop small molecules that could—in the long-term—become potential new antibiotics. These molecules are meant to block the interaction between the Bfd protein and the bacterioferritin.

“We think that we can actually uncover weaknesses in the bacteria’s metabolism that make it more susceptible—and then unable to thrive in a mammal,” he said.

So what’s the next step? Rivera says there’s no “next thing.” His science never stops.

“It’s a continuous process,” he said. “We’re developing a rigorous understanding and validation of the biochemistry and biology of iron homeostasis in bacteria.”

With a more profound understanding, LSU scientists at the nexus of chemistry and biology may discover other proteins that can be used to develop new molecules that might become the next antibiotics. And because bacteria won’t be resistant to them yet, these new antibiotics could be game changers for worldwide health.

“No patient has taken antibiotics that target a specific process of iron homeostasis yet,” Rivera said. “This would be basically a new source of antibiotics that can be used—for a period—to really combat bacteria that have developed resistance to other antibiotics.

“If we can validate this as a new possible antibiotic target, it would open the door to the discovery of completely novel antibiotics,” he said. “And that hopefully will contribute to saving lives.”