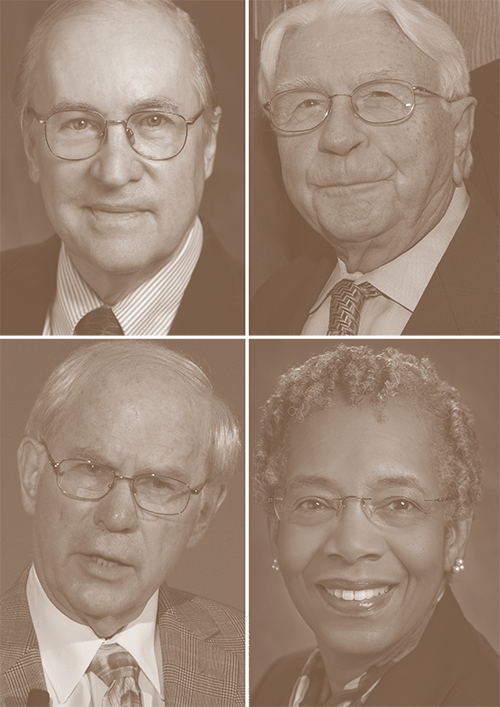 “We are looking forward to celebrating the outstanding achievements of this year’s honorees. They are leading educators, mentors and researchers who continue to make significant contributions to their fields,” said Cynthia Peterson, dean of the LSU College of Science and Seola Arnaud and Richard V.  Edwards Jr. Professor. “On behalf of the College of Science faculty, students and staff, I salute this year’s honorees and their remarkable work.”

Jeffrey Hanor, LSU Alumni Professor Emeritus in LSU’s Department of Geology & Geophysics, is an internationally recognized authority on the origin and geochemistry of waters in sedimentary basins. These waters range from potable groundwaters to hypersaline brines co-produced with crude oil and natural gas. Hanor has also served as an expert in groundwater contamination cases, including cases for the Louisiana Department of Environmental Quality and the Louisiana Attorney General. He is the author or coauthor of over 130 published articles and book chapters and was selected by the Hydrogeology Division of the Geological Society of America to be their 1998 Birdsall-Dreiss Distinguished Lecturer. In this role he gave presentations on his research at 32 colleges, universities, and government agencies, most during the spring 1998 semester.

Neil Kestner, Professor Emeritus in LSU’s Department of Chemistry, has long been a leader in several major areas of theoretical physical chemistry research including solvent effects on electron transfer reactions and theory of intermolecular forces, topics of fundamental and practical importance in chemistry. Kestner’s paper on quantum mechanical treatment of “inner sphere” electron transfer has been cited an average of 20 times per year for the past 20 years, clearly demonstrating its influence on other scientists and even garnering a mention in Professor Rudy Marcus’ Nobel Prize acceptance speech. Kestner’s contributions for excess electrons in fluids and his breakthrough concepts in electron correlation have had the kind of impact that most academics aspire to. His scientific potential was recognized early on with an Alfred P. Sloan Fellowship from 1968-1970, and his accomplishments were recognized by his election to the American Association for the Advancement of Science.  An authority on distance education issues, Kestner was also a member of the governing body for the Multimedia Educational Resource for Learning and Online Teaching (MERLOT) project and led local and national efforts to integrate the use of computer technology into the classroom.

Don Kniffen, a magna cum laude graduate from LSU’s Department of Physics & Astronomy, is an accomplished astrophysicist and more than 40-year veteran of the NASA space program. He has been a leader in the national and international high-energy astrophysics community, and is one of the scientists who developed the field of high-energy gamma-ray astronomy. The son of LSU Boyd Professor Fred B. Kniffen, Don was one of the early leaders of gamma-ray astronomy at NASA's Goddard Space Flight Center (GSFC) in Greenbelt, Maryland, from its earliest days, flying experiments on high altitude balloons through pioneering satellite experiments, the second Small Astronomy Satellite (SAS-II) and EGRET on board the second “Great Observatory,” the Shuttle-launched Compton Gamma Ray Observatory (CGRO). CGRO followed the Hubble Space Telescope. He served as NASA’s Project Scientist for CGRO, for which he was awarded NASA’s Medal for Outstanding Leadership in 1992. After retiring from GSFC, he began a second career as a professor and later held a number of top-level science positions within U.S. astrophysics. In his third career he became president and CEO of the Universities Space Research Association, a non-profit consortium of 105 Universities with PhD programs in space related fields. Currently, he is retired but continues to serve in consulting roles for NASA for the programs he formerly directed as a NASA program scientist at NASA Headquarters in Washington, DC

Saundra McGuire, Director Emerita of the LSU Center for Academic Success and retired assistant vice chancellor and professor of chemistry, is an internationally recognized chemical educator, author and lecturer who has travelled the globe promoting sure-fire strategies to help students, including those underrepresented in science and math professions, to be successful in their coursework and careers. Her latest book, Teach Students How to Learn: Strategies You Can Incorporate into Any Course to Improve Student Metacognition, Study Skills, and Motivation, was released in October 2015 and is a Stylus Publications best seller. McGuire is a recipient of the 2017 American Chemical Society (ACS) Award for Encouraging Disadvantaged Students to Pursue Careers in the Chemical Sciences and the LSU Women’s Center 2017 Esprit de Femme Award. She also received the 2015 American Association for the Advancement of Science (AAAS) Lifetime Mentor Award and the 2014 Lifetime Achievement Award from the National Organization for the Professional Advancement of Black Chemists and Chemical Engineers (NOBCChE). McGuire is also an elected Fellow of the ACS and AAAS.

The college’s 2017 Hall of Distinction ceremony will take place at the Lod Cook Alumni Center. The event will begin with cocktails at 6 p.m., followed by a seated dinner at 7 p.m. For more information about the Hall of Distinction, visit science.lsu.edu.