As a professor, it’s a rare thing to write one of the definitive textbooks on the subject you teach. And as a student who has not yet graduated, it’s almost unheard of. Yet, Ph.D. graduate Sumeet Khatri and his advisor, Professor Mark M. Wilde in the LSU Department of Physics & Astronomy with a joint appointment in the LSU Center for Computation & Technology, have pulled it off. Principles of Quantum Communication Theory: A Modern Approach is now out in pre-release and already being used by scholars around the world. 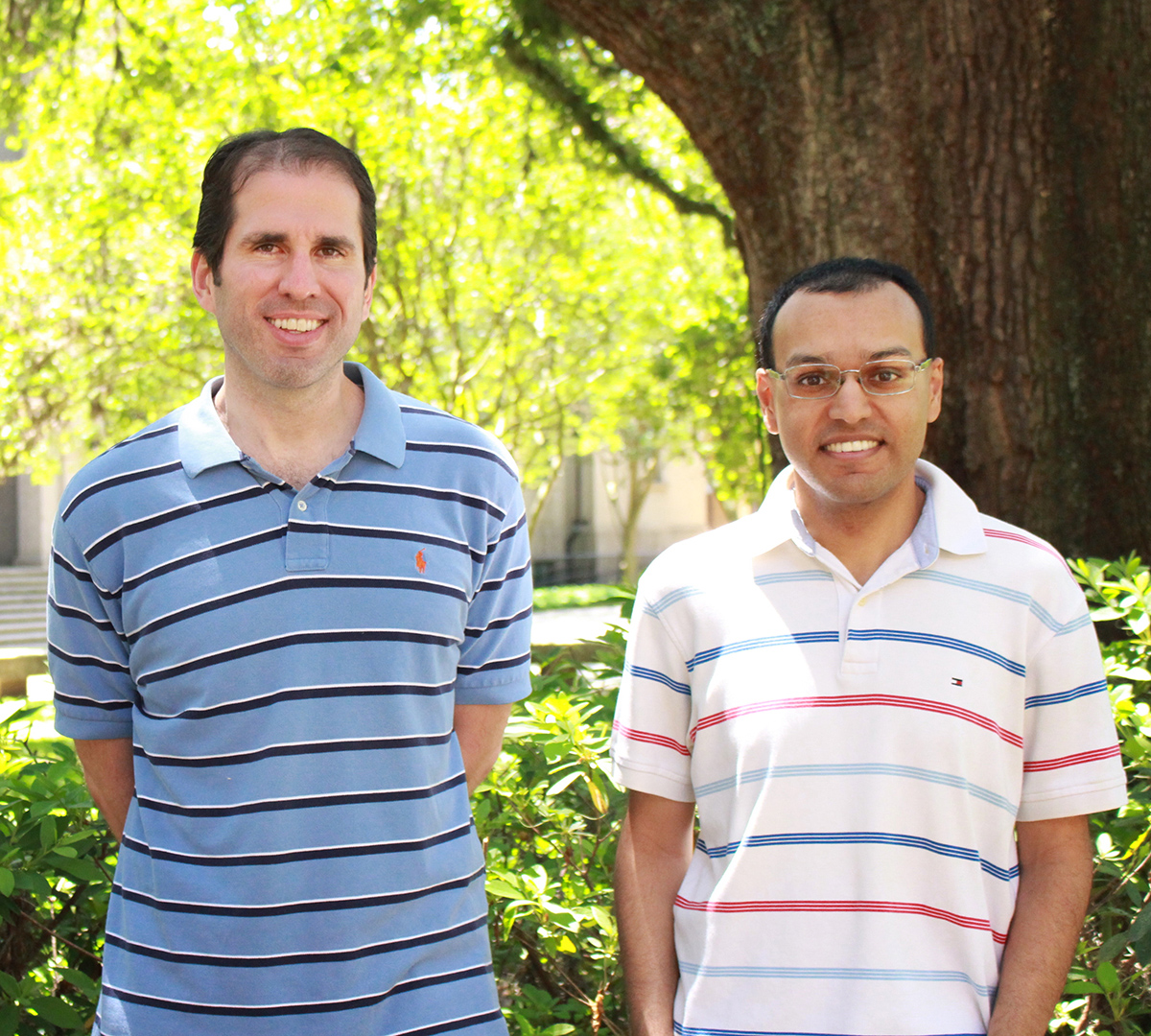 BATON ROUGE, May 3, 2021—Khatri joined Wilde at LSU in 2017 after earning his undergraduate and graduate degrees at the University of Waterloo in Ontario, Canada. He wrote his master’s thesis on quantum key distribution, which is a particular kind of quantum communication task that involves sharing a secret key for private communication. Not even a quantum computer could eavesdrop, which is why researchers who work on the frontiers of quantum information science, including on the development of a quantum internet, pay close attention.

“I was always interested in the theoretical aspects and wanted to go deeper, which is why LSU became the clear option since I could study with Mark, who is an expert in this area,” Khatri said.

Wilde, in turn, was impressed by Khatri even before he arrived at LSU.

“He had written these detailed notes, like 500 pages of notes in an extremely organized PDF based on his classes at the University of Waterloo, and that’s not every student who has this ability,” Wilde recalled. “I remember thinking to myself, ‘This guy can write.’”

“At each stage of the project, as we were working on the review article, Sumeet kept coming back and saying, ‘This section would be much stronger if we also included information on this other topic,’ so it grew and grew and became this big thing.”—Mark M. Wilde

Wilde’s initial idea was for him and Khatri to write a 100-page review article, summarizing the last decade’s advances in quantum communication, where theoretical and asymptotic approaches (“what could you do if anything was possible”) have taken a more pragmatic turn (“what could you do if you only had one shot, or limited use of a quantum channel”). Between reading Wilde’s first textbook, which established upper bounds and outer limits, and what was supposed to be the new review article, LSU students interested in quantum information science would have a solid foundation to pursue various advanced topics.

“But at each stage of the project, as we were working on the review article, Sumeet kept coming back and saying, ‘This section would be much stronger if we also included information on this other topic,’ so it grew and grew and became this big thing,” Wilde said.

The pre-release of Principles of Quantum Communication Theory: A Modern Approach is 960 pages and now available online, for free. It will also become available in print, but Khatri and Wilde are still working on the final version, to include exercises.

“I knew Sumeet would be a tremendous asset,” Wilde said. “He’s left no stone unturned and he’s already operating as a professor, giving lectures and mentoring other students. I have a lot of confidence in him and think he’ll do exceptionally well.”

“The pedagogical element in teaching and writing—even imagining lecturing in front of a group, putting myself in that frame of mind—helped me learn the material very thoroughly, and I really enjoy that process.”—Sumeet Khatri

Khatri successfully defended his thesis on quantum networks in February and received several offers from competitive institutions for his postdoc.

“I had an offer from Yale University where I could focus on the quantum internet, which is really taking quantum communication and putting it on a global scale,” Khatri said. “But I ended up choosing an option in Berlin, where I will be working on quantum computing with Dr. Jens Eisert—his group is very broad and what I appreciate about him is that he likes to have the big picture in mind, seeing how different topics connect with each other.”

Creating connections and structure has been a defining aspect of Khatri’s work on his and Wilde’s book.

“I always enjoyed explaining things to friends or colleagues, so writing a book was a natural extension of that and the detailed notes I was taking from my classes,” Khatri said. “The pedagogical element in teaching and writing—even imagining lecturing in front of a group, putting myself in that frame of mind—helped me learn the material very thoroughly, and I really enjoy that process. Taking material and trying to break it down to explain it in simple ways; this is also how I studied for exams as an undergraduate student.”

“This textbook is especially useful for people who have joined quantum sciences from different disciplines.”—Krista Petersone, QWorld

Principles of Quantum Communication Theory: A Modern Approach has already been added to graduate course syllabi around the world and adopted as recommended reading in various international quantum research groups. One of them is QWorld, based in Estonia.

“We chose to study Khatri’s and Wilde’s book because it offers a fresh and comprehensive overview, which is a fundamental steppingstone to the field of quantum communication,” said Krista Petersone, who leads one of the QWorld study groups. “This textbook is especially useful for people who have joined quantum sciences from different disciplines and are looking to obtain graduate-level knowledge. It has helped us establish a shared understanding of learning goals and find new interests in a field that provides many bridges to practice.”

There are indeed many ways to learn. You can read, or you can—apparently—write.

“If you want to understand every single detail of something, you could try writing a book about it,” Wilde said. “It’s always a very enriching and rewarding experience to write a book, and in the process, you become the expert. There is no doubt in my mind that Sumeet is a world expert in quantum information theory.”

Ten Minutes with Mark M. Wilde, Associate Professor in the LSU Department of Physics and Astronomy and the LSU Center for Computation & Technology (CCT) and 2018 Rainmaker

By Leaps and Bounds: PhD Student Positions LSU as a Leading Contributor to Research on Quantum Key Distribution

Learn more about Sumeet Khatri and Mark M. Wilde on their personal pages