Like elephants in china shops, hurricanes wreak havoc and can be hard to predict—picking up the pieces after them is no easy task, but anticipating how they’ll behave and what kind of damage they’ll do seems near impossible.

Until now, at least.

Several coastal universities have banded together with LSU to encourage a plethora of collaborative research projects that should make it easier to figure out where big storms go and what impact they will have in terms of wind, rain, storm surge and flooding. The effort is called HuRRI, short for Hurricane Resilience Research Institute, and involves—besides LSU—University of Miami, Texas-Tech, University of Texas-Tyler, University of Houston and University of Florida. Focused on resilience, HuRRI will help the nation as a whole get better at predicting, assessing, mitigating and recovering from severe storms, as well as protecting and educating communities.

In a first round of grants offered as seed funding by the six participating universities, three young faculty have been selected among a dozen LSU applicants—and they work just down the hall from each other as assistant professors at the LSU Department of Civil and Environmental Engineering. 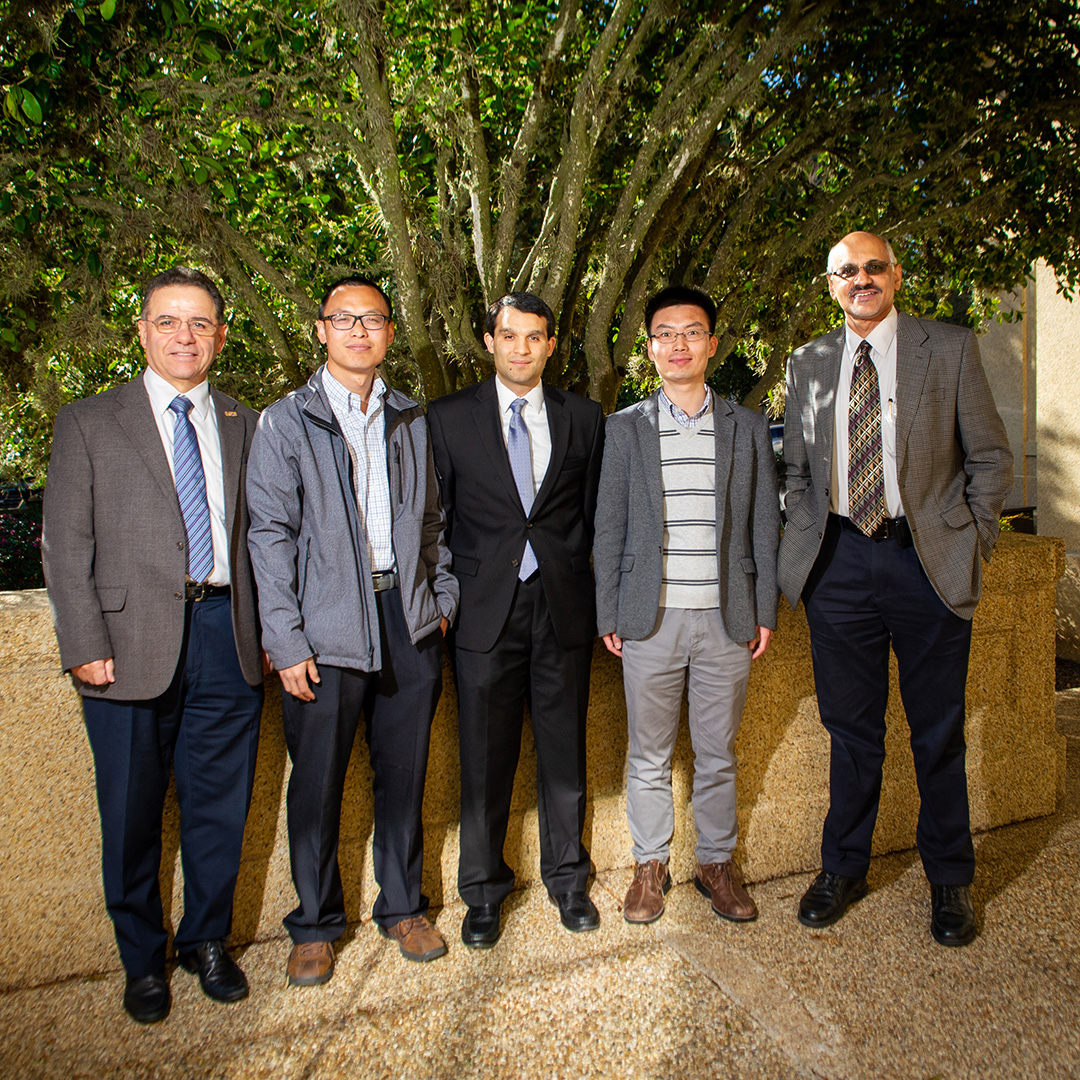 Hongliang Zhang, Navid Jafari and Chao Sun will now have a chance to test out their individual ideas and come up with initial findings that could lead to larger projects (and larger grants) in coming years. They’re collaborating—not with each other, but with different researchers at University of Houston (Robert Talbot of the Department of Earth and Atmospheric Sciences, Aaron Becker of the Department of Electrical and Computer Engineering and Gangbing Song of the Department of Mechanical Engineering, respectively). Houston was greatly impacted by Hurricane Harvey in 2017, the costliest tropical cyclone on record (tied with Hurricane Katrina in 2005) with $125 billion in damage.

Zhang, Jafari and Sun each have come up with proposals for how we can move away from the current wait-and-pay model to something closer to anticipate-and-accommodate in regard to big storms.

Zhang begins this month to gather and analyze historical precipitation data and satellite images from the last 20 years, connecting various amounts of rainfall with consequent flooding.

Surprisingly, precipitation and flooding forecasts have not been well connected in the past, so Zhang aims to come up with a new coupled model, the Weather Research and
Forecasting Model Hydrological modeling system:

“Specifically, we want to look at how rainfall interacts with waterbodies. Even with less precipitation, if a waterbody is already full, you can have larger flooding.”

Flooding is something his colleague Jafari is focusing on as well, from another angle. He’s exploring new ways to get real-time data during severe weather events by deploying sensors using unmanned aerial vehicles (UAVs) in hard-to-reach areas.

“To deploy a sensor without UAVs, we need to travel to the coast, get on a boat, ride in choppy waters, go out and deploy the sensors in the wetlands, and then come back home,” Jafari explains. “The main thing is doing this without jeopardizing someone’s safety. That’s especially difficult with a hurricane, because we don’t know the exact track, and it’s moving really fast.”

Having performed reconnaissance after natural disasters in the past, Jafari is trying to bridge the real-time data gap that currently exists—flooding is still often measured after the fact by looking for high water marks on buildings, etc., once an area becomes accessible by land again.

Of course, UAVs offer limitations of their own. The sensors can’t be too heavy for the drone to carry. Also, they have to stay in place during a hurricane, which easily could pick up a car. Jafari is working on a UAV-triggered anchoring system, so the sensors can penetrate about a foot into the ground as they’re dropped where water meets land.

John Pardue, Elizabeth Howell Stewart Endowed Professor in the LSU Department of Civil and Environmental Engineering has been involved with HuRRI since the beginning and hopes that some of this new research will show exactly how wetlands and marsh environments work to dampen the effects of storms.

“We think this is happening, but we don’t really have enough data,” he says. “Getting the data can be really dangerous in some situations, so doing this with drones would be a fantastic step forward.”

“For this initial call for proposals—and there’ll be a second one soon—we restricted the grants to assistant professors working with graduate students and postdoctoral fellows to help young faculty because we want them to start thinking about these problems,” he continues. “The goal is to be a resource to the community when disasters happen.”

Chao Sun is working on a project to help protect power transmission and distribution systems during severe storms. Loss of power on a grand scale can have wide-reaching and life-threatening consequences by shutting down hospitals and communications, and greatly delay rescue and recovery efforts. He’s building a high-fidelity mechanical model to look at the effects of water and wind on power lines and the towers and posts that connect them, and the added stress that wildly moving power lines can have on those towers and posts.

“The complex non-linear behavior of the wire during hurricanes where the wind field is very irregular is something we don’t yet understand correctly,” Sun explains. “Based on our results, we want to introduce techniques to mitigate the responses of the tower and wire so they can’t collapse or break.”

He’s developing a device that can be attached to a tower and counteract its motion. The frequency of the device can be tuned to that of a particular tower or building so as to mitigate the structural response, and the trick is to make it react quickly, effectively cancelling out the movement caused by wind.

“We want to introduce some smart control algorithms that can rapidly sense the hurricane information and adjust,” Sun adds.

The other part of his project is to look specifically at storm surge, the moving walls of water brought onto land by wind.

“We’re going to combine the hurricane wind and storm surge effect in our model,” he says. “During reconnaissance in Corpus Christi [Texas] after Hurricane Harvey, we saw that the foundation—the ground, the soil—became too soft from flooding and rain to support the towers. We need to incorporate that in our model, and based on the results, we’ll be able to take measures to protect the power systems.”

For more information, go to http://www.uh.edu/hurri/.