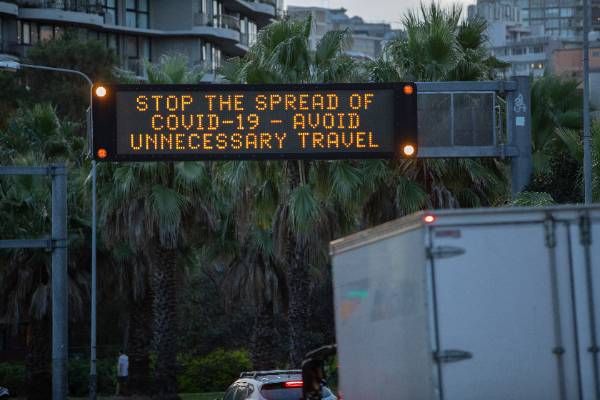 BATON ROUGE, LA – A number of metrics are being examined by experts to determine how successful, or unsuccessful, the nation’s response to the coronavirus pandemic has been thus far.

For LSU Civil and Environmental Engineering Professor Brian Wolshon, that metric is traffic.

Specifically, Wolshon and a group of fellow researchers are studying the impact of social distancing directives on human travel behavior, using highway volume data as a representation of personal activity and interaction. The research involves a comparison of roadway travel statistics throughout the state of Florida in March 2019 versus March 2020 to identify and track differences between rural and urban areas, freeways and arterial roads, etc. The goal of the project is to understand the early impacts of government restrictions on social interaction with the expectation that it will be possible to determine its effectiveness in limiting the timing and extent of infections and use the resulting data in future operational, strategic, and recovery planning efforts.

What the group has determined, so far, is that:

“The most important unanswered question is did reduced level of travel reduce sickness and fatalities from the coronavirus?” Wolshon said. “Time will tell. We were focusing on the onset and spread of the virus, not the ‘peak of the curve’ or the drop. We hear lots of evidence that it did, especially if you look at the spread stats through Florida to this point. They were definitely below New York, Louisiana, Michigan, etc., despite having way more people.

“We also still need to direct correlation between trip reduction and actual numbers of infection, transmission, and lethality for the virus. And we need to get data on people who sheltered in place and their health outcome.”

The group’s initial findings are detailed in a paper titled, “Traffic Impacts of the COVID-19 Pandemic: A Statewide Analysis,” which is under review in the American Society of Civil Engineers’ journal, Natural Hazards Review.

“[The team works] on lots of things, collaborative research in resilient and emergency traffic, so we do lots of collaborative research and instructional projects,” Wolshon said. “I was at a conference in Honolulu…we were having a call and discussing how traffic was less and where and when and why it was happening. So I literally coordinated the team through texts and wrote an initial work plan over the middle of the Pacific Ocean on the flight back [from Hawaii].”

The team decided to use Florida as its testing ground, Wolshon said, because its Department of Transportation has a real-time, interconnected network of hundreds of traffic flow sensors throughout the state. Its data is logged and stored continuously and has been for years. It’s also open to sharing the data, most of which is available online.

“We are still working on analysis of statewide evacuation movements during Hurricane Irma for a separate project, so we already knew how to collate, process, and organize the data from the (FDOT) files based on that project,” Wolshon said. “Effectively, we were doing the same thing but in the opposite direction. We were looking at traffic going down instead of going up like it does in evacuations.”

Next steps for Wolshon and the group are to analyze the “positive” aspects of the data in terms of reduced congestion and delay, especially as they relate to helping move freight and supplies, reduce fuel consumption and exhaust emissions, and increase safety and travel time reliability. They will also study other modes of transportation like regional rail, airlines, etc.