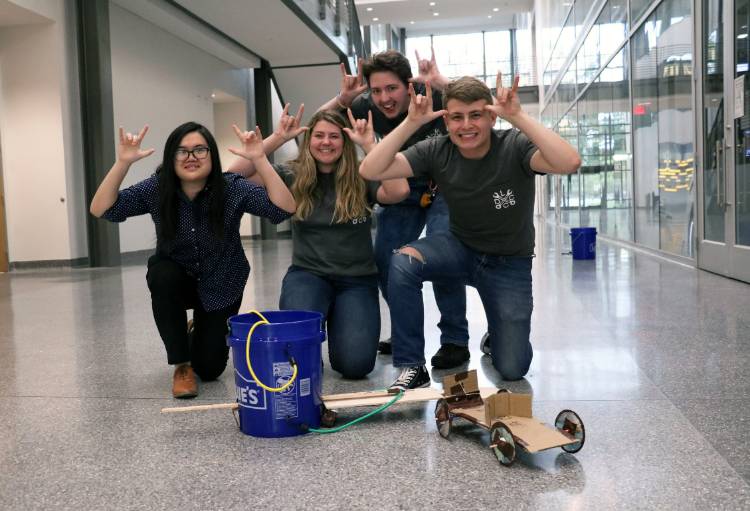 BATON ROUGE, LA – The Society of Peer Mentors traveled to Texas A&M University last year to get a firsthand look at its Texas Regional Engineering Competition, or TREC, and returned with the idea that they should do something similar here. That idea recently became a reality, as they organized and hosted the first-ever Louisiana Collegiate Design Competition.

“We had a blast, both working on a team and utilizing our engineering in a practical way, and we wanted to capture the experience that we went through at TREC and provide the opportunity to more Louisiana students,” said Lucy Guo, a mechanical engineering major from Baton Rouge who served as LCDC design chair and industry rep coordinator. “The main reason people attend college is to learn, and a lot of times, students get caught up in the theoretical learning aspect. We wanted to provide a more hands-on experience to help students learn both engineering concepts, as well as other soft skills like leadership, communication and teamwork.”

In all, 24 teams (131 students) participated—19 from LSU, two from Tulane University and three from area high schools. Students were tasked with transporting five differently sized payloads to a target area in a given time frame. They received the design prompt on a Friday evening and were given seven hours the next day to design and prototype their design. Each team was graded on points earned in the competition, cost efficiency and industry judge score.

“I feel like it went extremely well for a first-time event,” Guo said. “Participation was great and I was blown away by the prototype designs that teams came up with. I do hope that this will be an annual event. A lot of participants expressed interest in coming back either to compete or to help out with planning. One of the Tulane teams mentioned that they wanted to host an event like this at Tulane and also expressed interest in it being an event that switched to a different school each year.”