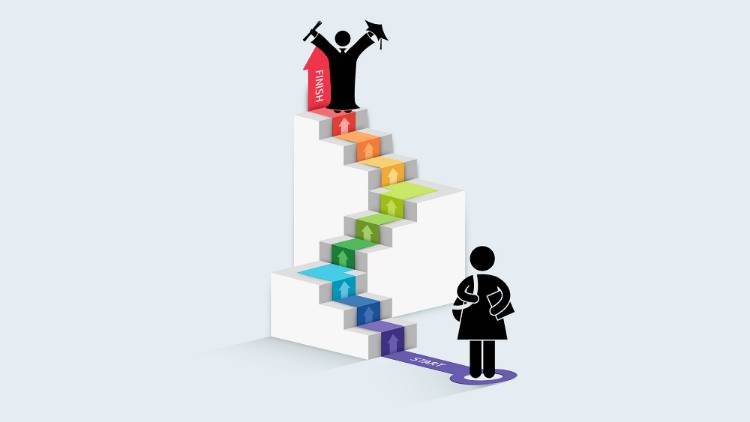 BATON ROUGE, LA – If the nameplate that reads STEPmom on Adrienne Steele’s desk is any indication of how much her students love her, one can assume she’s doing a good job running what was once LSU’s STEM Talent Expansion Program (STEP).

What started off as a way to encourage incoming LSU College of Engineering students to stay the course in their choice of major has turned into a well-oiled machine with Steele at the helm. Twelve years after its inception, the STEP program is now featured in the national Journal for Engineering Education, thanks to a paper written by Steele and her colleagues.

LSU’s STEP program began in 2007 with a National Science Foundation grant written by LSU Mechanical Engineering Undergraduate Program Director Warren Waggenspack and former LSU STEP Coordinator Summer Dann. The first program created under the STEP 1A grant was the Encounter Engineering (E2) Bridge Camp, in which incoming engineering students participate in team-building and design activities; attend academic sessions; and meet upperclassmen, faculty, and industry partners. During the weeklong event, students are divided into small teams led by a peer mentor. Twelve years ago, the camp started off with just 45 incoming students and five upperclassmen as team leaders. Today, it hosts as many as 300 students and 100 mentors each year.

“We hired the first peer mentors to work the first E2 camp and it ended up being such a success,” said Steele, assistant director of Student Programs and Outreach for the college and coordinator of the STEP program since 2013. “The freshmen said what they loved the most about the program was getting to meet the upperclassmen. The program started evolving from there, and we got more and more students to help work the camp.”

“They go through leadership training in the spring, so that when the camp starts in August, the students know each other and have been through the workshops,” she said. “The projects and presentations are all led by them. Students are doing it. I’m like the person behind the curtain just giving them what they need.”

As for how difficult it is for a student to serve as a peer mentor, Steele acknowledges that it’s hard work and a commitment, but one that many students are willing to take on.

“A lot of people who applied to be a mentor went to the camp last year,” she said. “They want to pay it forward by becoming a mentor. It also gives them a lot of skills and something they can put on their resume, and they make a lot of friends.”

Besides the E2 camp, the STEP 1A grant created the Introduction to Engineering (ENGR 1050) class for incoming students run by Industrial Engineering Instructor Paige Davis.

“The idea is to introduce the students to the different disciplines to help them better understand the differences between each discipline,” Davis said. “Each week throughout the semester is dedicated to a specific discipline, where a faculty member from the department presents to the students about the discipline, explaining career and research opportunities. The course is designed to introduce the profession, ethics, and diversity of the engineering field to students in their first year of college.”

When the STEP 1A grant ended in 2013, Waggenspack wrote another grant called STEP 1B that was awarded by the NSF. This grant was written to fund additional opportunities to improve student retention and graduation rates. The resulting programs included Supplemental Instruction, which is a sophomore-level “gateway” engineering course now led by LSU College of Engineering Director of Academic Affairs Liz Melvin, and the expansion of the peer mentor program, known as Society of Peer Mentors (SPM).

“The program became so big that the peer mentors decided to form their own organization in 2012,” Steele said.

With the STEP 1B grant having recently ended, Steele says a lot of the programs have become institutionalized in the college, with her continuing to facilitate those programs and other outreach initiatives.

“Part of what I do now is help other faculty members with the broader impact sections on their grants, helping with the outreach components of the grant,” she said.

“These STEP activities are important for engineering students because, number one, [we are a big college] and there are challenging curriculums,” Steele said. “For students, it’s getting involved—knowing someone, finding a group of students they can study with, having faculty and staff members you can talk to, and having this sense of community that’s a big part of it. A lot of the programs we do help them build up their other skills outside of the classroom, like communication and leadership. We not only teach them about it, but we give them a lot of experiences to be able to put what they’re using to the test. It helps them with skills they will need down the line once they start a job after graduation.”

In simpler terms, Steele says, “If you come in as a freshman, and you start struggling in your classes, it’s very easy to say, ‘I’m not cut out for this,’ and leave. But if you’ve been connected with an upperclassman, like through our freshmen camp, you’d meet students who might say, ‘Oh yeah, we all [struggled in] that class.’ Then you start to realize, ‘Ok, it’s not me. It’s just hard.’ Don’t give up. Keep trying.”

Ikuma, who conducted statistical analysis of the data and led the report writing, says their goal in writing the research paper was to see if students that participated in any of the programs were more likely to stay in engineering or STEM majors than those who did not participate.

“We tracked more than 10,000 students from 2007 to 2014,” Ikuma said. “We wanted to see which programs they participated in and what major they were in throughout their academic career. We submitted the first round of revisions in March 2018 and the second round of revisions in August 2018, when the final version was accepted for publication.”

Their research found that, indeed, STEM students who participate in LSU STEP programs are 10-14 percent more likely to stick with engineering and graduate than those who don’t participate.

“The STEP programs provide a way for students to feel connected to engineering and to their engineering peers,” Ikuma said. “I think this social support structure makes engineering feel more accessible and doable.”

The paper will run in the February issue of JEE.