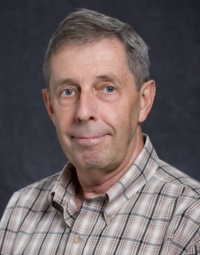 Research Contribution: In addition to the work documented in the references below, over the last 43 years, the multidisciplinary sweetpotato research team in the LSU AgCenter has released several cultivars of sweetpotato that have had multiple disease resistance. In addition to Beauregard, which dominated US acreage for almost 20 years, and was grown in several other countries, releases have included: Bayou Belle, Bellevue, Evangeline, Bonita, Muraski-29, and Orleans. This group has also developed a virus-tested foundation seed program operated at the Sweet Potato Research Station at Chase which has been providing high quality seed to farmers since 1999.

My research is primarily directed at solving short and long-term disease problems of the Louisiana and U.S. sweetpotato industries as well as research aimed at better understanding the biology of sweetpotato pathogens and diseases they cause.  Efforts currently emphasize clean plant production and minimization of cultivar decline, development of disease resistance and non-fungicidal management of Rhizopus soft rot.

It has long been recognized that sweetpotato cultivars decline in yield and quality performance over years after they are released and even the most popular cultivars are replaced about every 15-20 years.  The reasons for this decline have not all been well defined but it is thought that accumulation of viruses and/or mutations in the planting stock is responsible.  Although sweetpotato is the seventh most important food crop worldwide and an economically important crop in a few states in the U.S., including Louisiana, it has not received the same research attention that many other crops have enjoyed.  As a result of limited investment in research historically, our understanding of the viruses that infect this crop lagged well behind that for many other vegetatively propagated crops.  For many years, Sweet potato feathery mottle virus (SPFMV) was the only virus recognized to occur in sweetpotatoes in the U.S.  However, our field studies indicate that SPFMV by itself has minimal effect on yield of sweetpotatoes, even though it re-infects healthy plants in the field very rapidly.  Therefore, our research has been directed in part to determine what pathogens might be interacting with SPFMV to cause cultivar decline.  About 10 years ago, we found that two other potyviruses, Sweet potato virus G (SPVG) and Sweet potato virus 2 (SPV2) also occur commonly in sweetpotatoes in the southeastern U.S. (Souto et al., 2003).  More recently, Sweet potato virus C has been recognized as a distinct potyvirus species that is also a common component of the virus complex.  The whitefly-transmitted begomoviruses, Sweet potato leaf curl virus (SPLCV) and Sweet potato leaf curl Georgia virus, were found to occur in ornamental sweetpotatoes and some sweetpotato breeding lines.  In field plot studies conducted in 2000-2006, none of the virus combinations tested (SPFMV, SPVG, SPV2, SPLCV) produced the same yield depression obtained when using ‘naturally infected’ plants from farmers’ fields as inoculum (Clark and Hoy, 2006).

It now appears that sweetpotatoes are affected by a complex of viruses in the U.S. that may not yet be fully characterized.  Effects on the crop are likely determined by the interactions among these viruses with their host and the timing of infection.  We are continuing to try and isolate and identify viruses from sweetpotato with the intention of determining which ones are critical to cultivar decline.

As a service to the sweetpotato industry, we do meristem-tip culture for virus therapy and subsequent indexing to produce virus-tested plants of important cultivars and advanced breeding lines from the LSU AgCenter breeding program.  Beginning in 1999, these virus-tested plants have been provided directly or through a private company, Certis USA, to the foundation seed programs in Louisiana and other sweetpotato-producing states.

Sweetpotato producers now have access to relatively clean planting material, but they must usually increase it on their own farms for at least one year before they have sufficient seed to plant their crop.  Re-infection with potyviruses (SPFMV, SPVG, SPVC, and SPV2) can be very rapid.  A study done in collaboration with Drs. Tara Smith and Don Ferrin, showed that even starting with clean seed, yield declines on commercial farms could occur in the first 2 to 3 years and reinfection with potyviruses could be very high during the first year.  Subsequently, our efforts have been directed at trying to find ways to reduce virus re-infection and increase the availability of clean planting material.

Everlyne Wosula’s PhD research provided a lot of information about the relationships among aphid vectors, potyviruses, and spread of viruses in sweetpotato crops.  A key finding of practical significance is that potyvirus spread occurred primarily during a 3-4 week period at about the time sweetpotato vines are rapidly growing in the field, which coincides with a peak of titer, especially of SPFMV.  She also surveyed the aphids in sweetpotato fields, determined the relative transmission efficiency of the most common aphids: Aphis gossypii, Rhopalosiphum padi, and Myzus persicae, and found that common morning glory species were actually better acquisition hosts for SPFMV than sweetpotato.  Future research in collaboration with Dr. Jeff Davis in the Entomology Department will endeavor to expand on this information to identify strategies to reduce re-infection of virus-tested sweetpotatoes in the field.  Some of her findings have been used to change management practices in the sweetpotato foundation seed program operated at the Sweet Potato Research Station in Chase and has resulted in a reduction in the overall incidence of re-infection of foundation seed roots with potyviruses from 14% in 2012 to 0.6% in 2017.

In 2015, a new network for sweetpotato was formed within the National Clean Plant Network 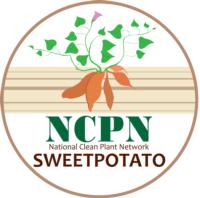 This is a collaborative network of sweetpotato clean plant centers in Arkansas, California, Hawaii, Louisiana, Mississippi, and North Carolina and I have served as chair or co-chair since its inception.  Two of the more important goals of this network have been to increase the amount of clean sweetpotato plants available nationally and to improve the capabilities for doing the highest quality work possible for assuring that plants are indeed clean.  In addition to providing a source of funding for conducting the services of therapy, diagnostics, and propagation needed to support the production of clean plants, NCPN involvement has fostered sharing of information such as testing methods and propagation methods among the centers.  Currently, NCPN is sponsoring initiatives to develop Quality Management Plans for clean plant programs, economic analyses of the true value of clean planting materials in agriculture, and education and outreach efforts to better inform client communities.  NCPN funding does not support research, but it has fostered collaborations among participants that we hope will enable different centers to take advantage of expensive technologies that they could not undertake individually, such as high throughput sequencing (HTS) to identify viruses that have thus far evaded detection and to recognize variants among the populations of known viruses that may affect our ability to accurately detect them. 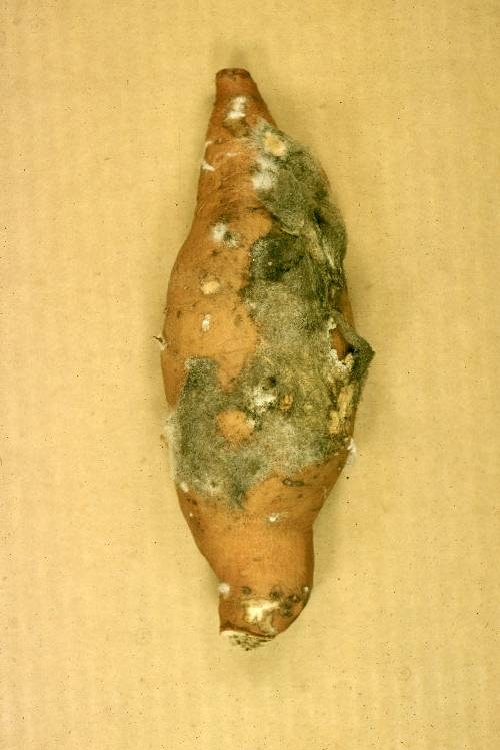 The Zygomycete that causes Rhizopus soft rot on sweetpotato, Rhizopus stolonifer, is an ubiquitous organism.  Rhizopus soft rot develops on sweetpotatoes that have been cured and stored, infection occurring through wounds that are incurred during the process of packing the storage roots for shipment to market.  It can completely decay roots in 1-2 weeks and for this reason, packers have routinely used a fungicide, primarily dicloran (Botran®), which is no longer accepted in some markets, or fludioxonil (Scholar®), applied to the roots after they are washed to control the disease.  Since sweetpotato is the most popular baby food and since it is also popular with people trying to follow a health-conscious diet, reliance on prophylactic application of a fungicide at the last stage in packing is undesirable.  We are therefore doing research to try and develop an integrated management approach to improve management of Rhizopus soft rot while reducing reliance on fungicides.

Resistance is often used for managing diseases, but there had been little effort to investigate resistance to postharvest diseases, especially in sweetpotato.  We developed methods for screening for Rhizopus soft rot resistance and found that Beauregard, the dominant cultivar in U.S. production from 1988-2008 had greater resistance than earlier cultivars (Clark and Hoy, 1994).  However, there are strong effects of environment in the field, storage environment, and type of wound on  resistance, making it very complicated to identify sweetpotato genotypes that are resistant across multiple production scenarios (Edmonds et al., 2015).  We have been working with Dr. Don LaBonte to develop lines with greater levels of resistance across multiple production scenarios that are horticulturally acceptable.

Curing sweetpotatoes immediately after harvest by holding them for 5 to 7 days in a warm (29o C), humid (85 to 90% RH) environment to promote wound healing is very effective in managing Rhizopus soft rot during storage.  The Sweany et al. (2020) study also examined re-curing after storage, washing, and inoculation and found that as short a period as 4 hours of re-curing using the same environment as used for curing could significantly reduce Rhizopus soft rot.

The above experiences indicating that numerous variables could affect susceptibility of sweetpotatoes to Rhizopus soft rot has led us to postulate that these factors may be affecting Rhizopus soft rot susceptibility by affecting the ability of the sweetpotato to rapidly heal wounds that are required for Rhizopus infection.  Waana Kaluwasha is currently doing PhD dissertation research in which she is examining wound healing in sweetpotato in relation to environmental and cultural variables and how it affects development of Rhizopus on wounds and incidence of Rhizopus soft rot.  We are endeavoring to integrate use of resistance, cultural practices, and other non-fungicidal control methods to development an effective management program that sweetpotato packers can follow with minimal reliance of synthetic fungicides.

The LSU AgCenter sweetpotato breeding program is a highly productive team effort involving scientists in the School of Plant, Environmental, and Soil Sciences, the Sweet Potato Research Station, and the Departments of Plant Pathology & Crop Physiology and Entomology.  Breeding lines from this program are screened for resistance to multiple diseases including Streptomyces soil rot, Fusarium wilt, internal cork, root-knot nematode (as of 2018 this includes both the southern root-knot nematode, Meloidogyne incognita and the guava root-knot nematode, M. enterolobii), bacterial root and stem rot, Fusarium root rot, and others.  The LSU AgCenter  program has been the primary source of resistance to Streptomyces soil rot and has released a number of cultivars, some of which have been very widely adopted by the industry.  The most notable example is Beauregard which accounted for >80% of U.S. sweetpotato acreage during the period 1988-2006.  Since 1980, the following cultivars have been released all of which are resistant to Fusarium wilt and Streptomyces soil rot and have other disease resistance as well:

1994 - L86-33 - used as a source of multiple disease and pest resistance in U.S. and international breeding programs

Villordon, A., and Clark, C.  2018.  Variation in root architecture attributes at the onset of storage root formation among resistant and susceptible sweetpotato cultivars infected with Meloidogyne incognita.  HortScience 53:1924-1929.

Edmunds, B. A., Clark, C. A., Villordon, A. Q., and Holmes, G. J. 2015.  Relationships of preharvest weather conditions and soil factors to susceptibility of sweetpotato to postharvest decay caused by Rhizopus stolonifer and Dickeya dadantii.  Plant Dis. 99:848-857.